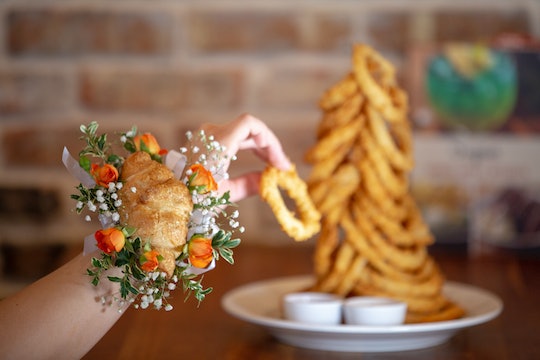 Get Your Date A Croissant Corsage, & You'll Basically Win Prom Date Of The Year

Part of the fun of prom season are the traditions that come with it. Fancy dresses, epic promposals, and the classic stairwell photo opp are all par for the course for the ultimate high school dance, and the night wouldn't be the same without them. But one prom classic is getting a facelift thanks to Croissant Corsages, the hilarious and edible accessory from Cheddar's Scratch Kitchen that celebrates dance season and word play. Fashion never tasted so good.

The seemingly bizarre trend stems from a viral tweet from 2017, in which a high school student shared a text exchange between her and her prom date in which he asked her if he had to buy her a "croissant" for the big dance as Teen Vogue reported. She figured out he meant corsage based on context clues, but of course that didn't stop her from taking the opportunity to roast him on the internet for his mixup. People immediately started responding with similar experiences, and the moment became an inside joke of sorts for prom-goers and internet lovers everywhere. And now, Cheddar's Scratch Kitchen, a popular restaurant in Dallas, Texas, is providing teens (or anyone else in the market for a corsage) with the opportunity to take the joke even further with actual croissant corsages.

The arrangements are made in partnership with the Dallas-based florist Petals and Stems, and as you can see, a croissant corsage is exactly what it sounds like. The large flower that would normally go in the floral accessory is replaced by Cheddar's Scratch Kitchen's famous honey butter croissants, and honestly, it's pretty pleasing to the eye. Plus, the accessory offers you a tasty snack built into your outfit, which I definitely would've appreciate at my prom when the dance was lagging and the complimentary chicken nugget tray was empty. If my date had gotten me one of these back in the day, they would've earned the prom date of the year award for sure.

If you need any more reason to get on board with the yummiest prom look of all time, you'll be pleased to know you can also pick which color flowers you want with your croissant according to the press release about the product, so the corsage can match your dress even after the croissant has been inhaled. No need to sacrifice fashion for deliciousness. And bonus on top of bonus: each corsage comes with a $10 Cheddar’s gift card, so you can save on your prom dinner with the purchase too. Wins all around.

Unfortunately for most bread enthusiasts, the croissant corsages are only available for pickup in the Dallas Cheddar's Scratch locations. But if you do live in the Dallas area or are willing to trek there for the novelty accessories, you're in luck. The arrangements are selling for $20, and you can order them online on the Cheddar's Scratch website. However, the restaurant warns that the croissant corsages will only be available while supplies last, so order soon if you want to get in on the fun. Let's get this bread.

Edit Note: This post was updated from an earlier version.