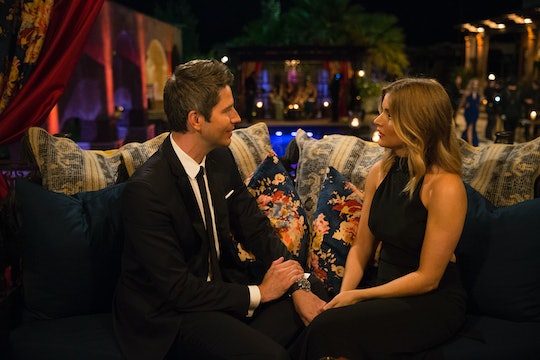 Chelsea & Arie Hit It Off Instantly On 'The Bachelor'

The race to win Bachelor Arie Luyendyk Jr.'s heart is officially on and one woman has emerged as the leader following night one — much to the other women's chagrin. Chelsea Roy and Arie kiss on The Bachelor premiere and people on Twitter cannot handle the heat they are putting out there. Chelsea, it seems, has pulled ahead not just as the frontrunner in this Game of Hearts (sorry), but she also seems to be well on her way to winning the (much less coveted) title of this year's Bachelor villain. With some slick maneuvering, Chelsea managed to get, if not the first kiss, definitely the first make-out session with Arie. The other women are peeved, but Bachelor Nation is into it.

Chelsea made it pretty clear right off the bat that she did not come here to play. When all the women had finally made it out of the limousine's and were introduced to Arie, it was time to try and get some one-on-one time with the man of the hour. Without missing a beat, Chelsea swooped right in and pulled Arie aside for a little chat. She was quickly interrupted by Maquel, or as Chelsea termed her, "the one who makes all the noise." The other 28 women took turns jockeying for a moment with their potential future spouse, and many began worrying that time was running out and they wouldn't get a turn. That's when Chelsea decided she needed, no — she deserved — a second go-round. And boy did she ever.

The other ladies grumbled that this was unfair and really very rude and, to use my favorite Bachelor buzzword, disrespectful. Surely Arie would see through this very underhanded move and cut that lady right that night. Alas, not so, bachelorettes. At the very moment they all agreed with grim satisfaction that there was no way she was getting a rose, Arie was reminding everyone why he was a great choice for Bachelor. He and Chelsea shared a spectacular kiss. As opposed to the chaste smooch he shared with Brittany, this was full-on. And then she received the First Impression Rose to boot. The other ladies are not impressed.

I, however, was very impressed. This is what I came to see from Arie. And it is also what the ever-tweeting Bachelor fans across the globe came to see as well. Even though it was a pretty mixed bag from people about whether they were into the kiss or not. I mean, it was a lot of tongue for night one. But then again, establishing a connection right off the bat is important.

Getting the First Impression rose means, at the very least, that you're safe for another week. It also means that you've got a solid leg-up on the rest of the competition. Everybody was aiming for it, and Chelsea full-on went for it. She claimed to the cameras that though she's not a competitive person by nature, she goes for the things that she wants. Excuse me while I say that there is absolutely no way Chelsea is not competitive by nature. You don't need to hide it, girl. You can be a competitive person and people will still like you. Then again, making not-so-nice comments about your competitors won't do you much good.

Overall, it looks like The Bachelor audience is having a tough time getting behind Chelsea. It looks like she's already on her way to becoming the woman that everyone loves to hate. But that makes for great TV.