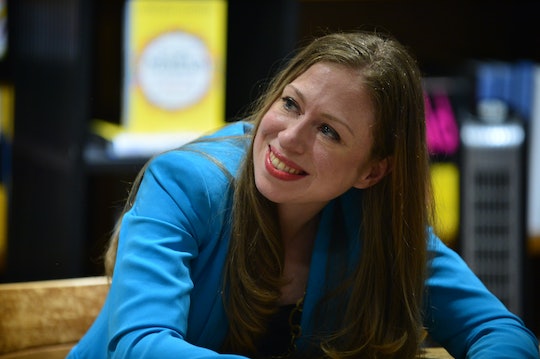 In one of the cutest tweets ever on Monday, Chelsea Clinton announced she's pregnant with her second child, according to E! Online. In her announcement, she said she's "feeling very blessed and grateful this holiday season." The baby would be Democratic presidential frontrunner and former Secretary of State Hillary Clinton's second grandchild.

Clinton announced that she and husband Marc Mezvinsky were expecting another baby with a photo of their first child, Charlotte, who was born in September 2014, according to The Hill. In addition to the holiday message, Clinton's tweet said, "Next summer, Charlotte is going to be a big sister!" and featured an adorable photo of her first child reading a book with the title Big Sisters are the Best. It's no doubt that Charlotte will spend the next nine months preparing for the role of big sister.

Shortly after, Hillary Clinton shared her daughter's message, saying she and Bill could not be happier for the couple. "We're so excited to meet our second grandchild!," the message read. Bill relayed the same message, saying he and his wife are so thrilled to watch his daughter, Marc, and Charlotte grow their family, according to Twitter.

Just a few months ago, Clinton told Ellen DeGeneres that she's supporting her mother's presidential campaign because she wants her daughter to have the same opportunities that her mother had, according to E! Online:

I didn't know that I could love and admire and respect my mom anymore until I became a mom and couldn't believe any more in her as the right leader for the country I want my daughter to grow up in. But I do because she has been working to ensure that every woman should get the chance to grow up to be you or to grow up and be the next Hillary Clinton.

Hillary Clinton has previously said that being a grandmother profoundly changed her approach to politics, according to People:

It will affect my being, not just my thinking. I hope grandfathers feel the same way, I know my husband does. Having that next generation right there and thinking about everything you want to do both personally but in our cases, publicly and professionally, to give that child the best chance in life to be all he or she can be, that is profoundly moving to me.

Future photos of the entire Clintons are sure to make them one of the cutest families in politics.