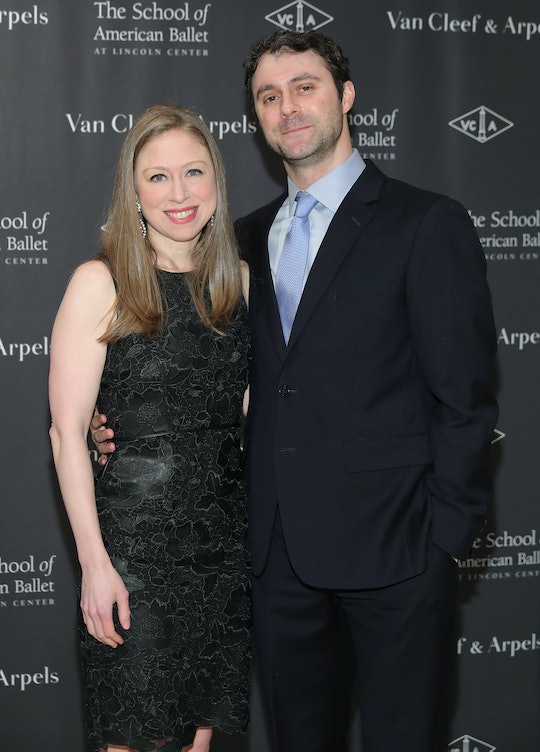 Hillary Clinton's grandma duties are about to become even bigger. On Tuesday afternoon, Chelsea Clinton announced that she is pregnant with her third child. "Marc and I have loved watching Charlotte be such a wonderful big sister and we’re excited to watch Aidan become a big brother!" Clinton wrote on Twitter. "We cannot wait to meet our newest addition later this summer."

Based on her tweet, Clinton is due sometime this summer, which is from June 21 to Sept. 23. That would mean she is currently anywhere between two and four months along. She didn't share her exact due date — which will certainly make things more fun for fans as summer approaches, because a birth announcement could be announced any day.

And as Clinton mentioned in her tweet, she and her husband Marc Mezvinsky already have two children: Charlotte, 4, and Aiden, 2. Clinton has made it clear that she is raising her kids to be good citizens of the world — not to mention, she is helping inspire millions of other children to do the same. She is the author of several children's books, each with a focus on making a difference. For example, in October, she released the book Start Now! You Can Make a Difference, which provides "the youngest activists among us" with "facts, stories, and tips on how to change the world," according to the book's description on Amazon.

In an October interview with Chicago Parent, Clinton shared a few ways that she is teaching her own kids to engage in positive choices for the world from a young age. One thing she does is have her children take out the recycling. "My son, who’s 2, feels really proud that he can carry a little box to the recycling bin," she told Chicago Parent. "And I know it’s a little box, but it’s helping teach him that civic engagement and being a positive citizen is something that can start young — and it’s something we can manifest in everyday choices we make."

She added that she is already teaching Charlotte "some bigger concepts," and she hopes that planting these seeds so early will help Charlotte and Aiden "become thoughtful, engaged citizens almost without them realizing it."

Clinton's announcement tweet quickly racked up likes on Tuesday, and many fans responded to share well wishes with the former first daughter. "Congratulations!!! @HillaryClinton and @BillClinton must be thrilled too!!" one fan replied on Twitter. Clinton swiftly responded to the tweet about two minutes later, writing: "Thank you! They are :)."

It's not really a surprise that Bill and Hillary Clinton would be excited to be gaining another grandchild, but it's so sweet that the future mom-of-three took the time to share that with fans.

Clinton responded to plenty of other fans' tweets with thank yous, and it's clear that she is so excited to welcome another child. Hopefully she will share updates with fans — and hopefully she and Mezvinsky will keep the pattern going, and name their third child after a Sex and the City character as well.