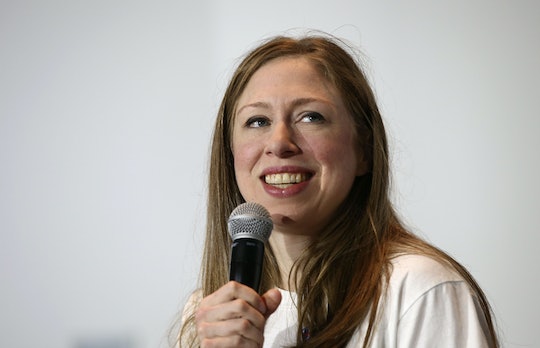 And then there were five! Former first daughter Chelsea Clinton gave birth to her third child, a boy, with husband, Marc Mezvinsky, on Monday, July 22, according to an announcement shared on Twitter. In addition to sharing both news of the birth as well as the new baby's name, Clinton said the new family of five was "overflowing with love and gratitude."

"This morning we welcomed our son, Jasper Clinton Mezvinsky," Clinton shared in a tweet on Monday morning. "We are overflowing with love and gratitude and can’t wait to introduce him to his big sister and brother."

In a tweet celebrating the birth of her newest grandchild, former 2016 presidential nominee Hillary Clinton said she and former President Bill Clinton were "so thrilled" at the "happy news."

Clinton and Mezvinsky announced they were expecting their third child in January, noting at the time that they were excited to give their two children — 4-year-old Charlotte and 3-year-old Aidan — another sibling. "Marc and I have loved watching Charlotte be such a wonderful big sister and we're excited to watch Aidan become a big brother!" Clinton wrote in a tweet posted back in January. "We cannot wait to meet our newest addition later this summer."

Clinton, who married Mezvinsky in July 2010, hasn't been shy about her desire to have multiple children. In an interview with People shortly after Charlotte's birth in 2015, Clinton said motherhood had changed her and she was already ready to grow her family again. "I didn't know I could care more intensely about anything until I became a mom," she told People at the time. "Somehow I love my husband even more, I love my parents even more." Clinton also told People that the birth of her daughter had changed how she approached her work, saying: "I feel even greater urgency about the work that I do, particularly around women and girls being a mom of a daughter."

Clinton later told ELLE that Charlotte's birth had completely changed her life and daily routine. "My whole life is reoriented around my daughter in the most blessed sense," she told ELLE in 2015. "I now understand — this is something else that Marc and I talk about all the time — all of the enthusiastic, bombastically spectacular, wonderful things people say about their children, because we also feel and think all those things." Clinton went on to describe Charlotte as "the most remarkable little bubbly, perfect, chunky monkey creature ever."

In fact, it was her children that reportedly inspired Clinton to get into writing children's books, according to People. "[My kids] love being read to and talking about what they're reading in books," Clinton told the magazine last year, adding that books are a great way to "break down and communicate ideas" and "stories of real empowerment" to children.

After writing It's Your World: Get Informed, Get Inspired & Get Going! in 2015, Clinton has since published She Persisted: 13 American Women Who Changed the World, Start Now! You Can Make a Difference, and, most recently, Don't Let Them Disappear.

Perhaps the newest member of the Clinton-Mezvinsky family will grow up to be an avid book lover just like his mom and older siblings.