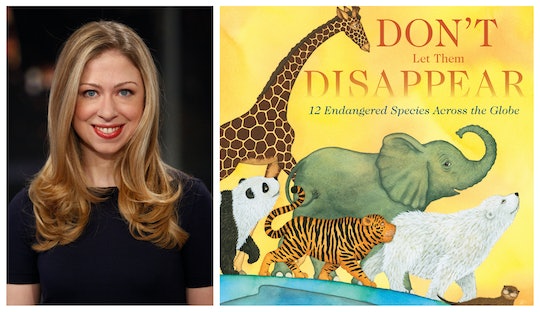 Chelsea Clinton remembers the poaching crisis of the late '80s, back when she was a child. "I remember my mom [Hillary Clinton] and I in Arkansas, trying to learn whatever we could about what was happening and what we could do to try and help elephants," she tells Romper by phone. The international ban on ivory helped populations recover, but today, poaching is again putting the majestic animals at risk. "We lose 97 elephants every day, and we know if those trends continue we will lose African elephants well within our lifetime," she says, "and I just find that unacceptable." Clinton is asking kids and adults to care through a beautiful, gentle new picture book, Don't Let Them Disappear: 12 Endangered Species Across The Globe, illustrated by Gianna Marino, out on April 2 from Philomel, a Penguin Random House imprint.

"I think there is something special about the connection between kids and animals," Clinton says. And she would know: she has spoken to kids across the nation for numerous book projects, and has two children of her own, Charlotte, 4, and Aidan, 2, with a baby due this summer.

Clinton never lost her concern for endangered animals like African and Asian elephants. "I think they’re so beautiful and majestic and I love that they’re a matrilineal — very maternal — species." This love comes across in her sweet, poetic sentences about the 12 endangered species in Don't Let Them Disappear that children will connect to. Romper has an exclusive look at the picture book, which will also be released in Spanish as No Dejes Que Descaparezcan on April 2, Earth Day.

Each page teaches readers about the lives and relationships of a different animal, and softly implores children: Don't let them disappear!

While children obsessed with giraffe figurines can grow into adults inured to environmental issues, parents are often more keenly aware of existential threats. "We know that saving a native species isn’t only about the species themselves but the health of the planet," says Clinton, explaining the delicate ecological systems these animals support.

I think there is something special about the connection between kids and animals.

By focusing children on certain, often adorable species (otters!) and their unique characteristics, she has done something clever: combat what psychologists call the "collapse of compassion," where a tragedy of too great a magnitude is harder for people to care about. Hence: 12 lush illustrations by Gianna Marino. "I’m just hoping that the words match her beautiful illustrations," Clinton says of her collaborator.

As she prepares to become a mom of three, Clinton is trying to keep the arithmetic in perspective. "My husband is one of 11 [children] and I’m an only child, so anything between those two numbers is a new experience for both of us," she says of deciding to have a third. "We’re just so thankful to be the parents of Aidan and Charlotte and are looking forward to meeting the next munchkin this summer, but know it will be a big change in our lives."

Our friends with three or four children tell us it’s going from man-to-man to zone defense, so we’re focused right now on being prepared.

Clinton, who is vice chair of the Clinton Foundation, and wrote the bestselling picture book She Persisted: 13 American Women Who Changed The World, is taking it all in stride. "Our friends with three or four children tell us it’s going from man-to-man to zone defense, so we’re focused right now on being prepared, as much as we can be prepared," she laughs.

And that means working to preserve the world her kids will inherit.

After all, our own life spans don't outstrip those of the elephants portrayed in the book. We have only a short time to convey to our children their place in the world.

And even less so her son Aidan. "My 2-and-a-half-year-old loves numbers and loves to count, so he knows that someone who is older than he is is a greater number than he is, but understands it even less than his sister."

The beautiful thing about the book is it shows how all of us, big and little, are connected.

Don't Let Them Disappear is out on April 2 from Philomel.