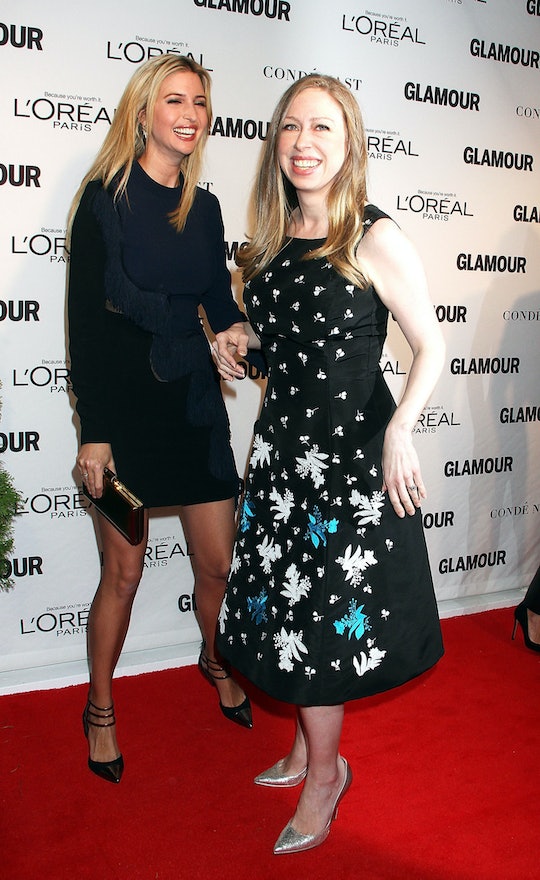 The millennial daughter of presidential nominee Hillary Rodham Clinton and former president Bill Clinton, Chelsea Clinton, sat down for a Q&A with Glamour magazine yesterday and revealed some pretty telling feelings about her friendship with Ivanka Trump. Yeah — Donald Trump's daughter. The guy who is running for president against Chelsea Clinton's mom? They've totally hung out before. And if they do again in the future, Chelsea would be sure to ask Ivanka about her claim that Donald Trump will fight for pay equality if he becomes President.

Ivanka and Chelsea are both in their early 30s, married, have young children, and they are both trying to balance their own careers under the glaring spotlight of their parents' grueling political campaigns. While the two aren't BFFs or anything, they've gotten along pretty well over the years whenever they've crossed paths — which is actually a lot more often than you might have realized.

The Trumps and the Clintons were never friends per se, but at the height of their respective careers they certainly ran in a lot of the same circles. Hillary Clinton was elected as New York's first female senator in 2000 — which is probably why she was invited to NYC mogul Donald Trump's high society wedding.

While Donald has made it very clear that he is not a friend of Clinton's — and never really was — Ivanka told People magazine that she and Chelsea have remained amicable despite their families' feuding: "We're both incredibly supportive of our parents, as we should be — but we also continue to have great respect for one another."

Last year, Chelsea said something very similar to Ivanka when asked about her friendship with her: "Friendship is always more important than politics. I learned that growing up, watching my parents be friends with people across the political spectrum in Arkansas."

Yesterday, in her live Q&A with Glamour, Chelsea was asked to weigh-in on Ivanka's speech at the Republican National Convention last week. In that speech, Trump's daughter spoke of her father's attributes, his successful career, and his family values — but she also threw in some statements about his policy plans that, when fact-checked, just didn't add up with what Trump has been presenting both in his own speeches and on his campaign's website.

Specifically, Ivanka said that her father would be in full support of women, both in and outside of the workforce — something that Trump hasn't exactly been demonstrating to voters through his social media and in his speeches.

As President, my father will change the labor laws that were put into place at a time when women were not a significant portion of the workforce. And he will focus on making quality childcare affordable and accessible for all.

When asked about this claim, and how she might approach her friend Ivanka about the claim, Chelsea didn't balk — she gave an immediate and very straight forward response.

"It would be that question: 'How would your father do that?'", she told Glamour's reporter, mentioning that there has been nothing in Trump's rhetoric — his policy plans or his speeches — that would imply he has any intention on promoting this kind of gender equality.

I think the 'how' question is super important. In politics as it is in life.

Chelsea then reminded listeners that, unlike Trump, her mother has laid out in great detail what her plans are — and they definitely include a strong voting record on gender equality, paid leave for parents, and women's rights.

Chelsea didn't speak further about her friendship with Ivanka, but Ivanka has gone on record several times saying that their friendship never had anything to do with their parents (they were introduced by their husbands, not their parents), "Our friendship has never been about politics," she told People, "I don't expect it will be about politics in the future."

Hopefully she'll answer Chelsea's question — and fill in voters on why she chose to emphasize something in her RNC speech that just doesn't appear to be based in fact.