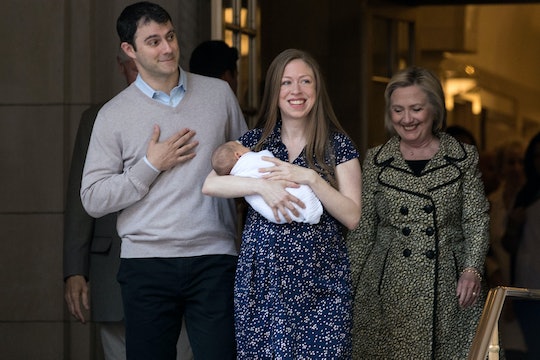 All Three Of Chelsea Clinton's Children Have Such Sweet & Special Names

Chelsea Clinton and husband Marc Mezvinsky are officially parents of three! On Monday, July 22, the former first daughter took to Twitter to share the exciting news of her newborn son's arrival, including his adorable and unique name: Jasper. And for those wondering, Chelsea Clinton's other children's names are also just as special and sweet. In fact, all three of her children's monikers have really lovely meanings behind them.

Starting with Clinton and Mezvinsky's newest arrival, his full name is Jasper Clinton Mezvinsky. "This morning we welcomed our son ... We are overflowing with love and gratitude and can't wait to introduce him to his big sister and brother," Clinton wrote on Twitter today.

Jasper isn't the most common name out there and its meaning is really precious — literally. According to NameBerry, the name Jasper means "bringer of treasure," noting that it's Persian in origin, with Casper or Caspar being its German counterparts. You're probably not going to encounter many Jaspers in your life, as it was the 154th most popular name in 2018, according to NameBerry, but that might just be why it's so perfect for Clinton and Mezvinsky's newest bundle of joy.

Clinton's newborn son's arrival comes roughly three years after she and Mezvinsky welcomed their second child, a son named Aidan, in 2016, according to NBC News. Like with Jasper, she and her husband announced their son's arrival on Twitter. "Marc and I are overwhelmed with gratitude and love as we celebrate the birth of our son, Aidan Clinton Mezvinsky," she wrote in a tweet at the time.

Aidan is a slightly more popular name than Jasper, and its meaning is equally special. According to SheKnows, the name is Gaelic in origin and means either "Name of a saint" or "fire." Whichever meaning you opt to assign to it, it's definitely a strong name. I'm sensing a bright future ahead for Clinton's 3-year-old, just sayin'.

Clinton's first child, a daughter named Charlotte, has perhaps the most traditional name of all three of her children. At the time, she tweeted that she and her husband were "full of love, awe and gratitude" following their daughter's birth. Proud grandpa President Bill Clinton later issued a statement saying, "Charlotte's life is off to a good start," The New York Times reported.

As for the meaning behind Clinton's daughter's name, it's actually quite cute. According to BabyCenter, Charlotte is both a popular and pretty traditional name — rooted in French origins — and means "petite" and "feminine." It's also a common name for royalty, according to BabyCenter, considering Prince William and Kate Middleton also chose the name for their daughter, 4-year-old Princess Charlotte.

Charlotte, Aidan, and Jasper are all very sweet names, and the meanings behind them make them all the more special. While Clinton hasn't yet updated her followers on how Jasper's big sister and brother have welcomed their family's newest addition, it's probably safe to assume they're enjoying this special time together as a family of five.