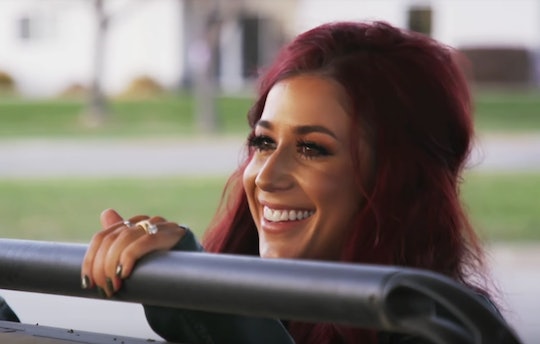 Fans of 16 & Pregnant and Teen Mom 2 have been able to witness Chelsea Houska's journey as a mom for years now. Between the birth of her first child, Aubree, and her son, Watson, it's been such a treat to follow along with her adorable family. And celebrating yet another exciting milestone on Wednesday, Aug. 29, Chelsea Houska announced she's officially given birth to her third child, a baby girl named Layne.

On Wednesday, Houska confirmed that she and her husband, Cole DeBoer, welcomed their third child into the world. "Happy birthday to YOU, sweet baby Layne 🖤," she wrote on Instagram with a photo of her baby girl.

Their new daughter joins their two children, 8-year-old daughter, Aubree, who she shares with her ex-boyfriend, Adam Lind, and her and DeBoer's 1-year-old son, Watson.

Hearing that Houska is now a mom of three could not be anymore exciting, especially since fans have been with her from the moment she announced in March that she was expecting her third child, according to Us Weekly, and then watched as she made the big announcement to her family during an episode of Teen Mom 2 in June. "We could not be any more excited," Houska wrote in the caption of her Instagram post announcing her pregnancy.

Meanwhile, her husband was just as happy about their big announcement, according to MTV News. "I'm ecstatic to have another princess under our roof," DeBoer told MTV News. "The men in this household are standing their ground even though they are outnumbered."

And now that excitement is real, considering their newest addition into their family (and the Teen Mom 2 family) is finally here.

The journey to meeting their daughter was nothing short of eventful. Although Houska didn't post many pregnancy updates on Instagram, she did keep fans in the loop over the last few months on Twitter, taking to the platform to complain about some minor inconveniences that pregnancy causes (she had a serious case of pregnancy brain during her third trimester) and venting about how ready she was for her third pregnancy to be over. "Apparently my 'over it' stage of pregnancy hits at 33 weeks 5 days because...#notmuchlonger," Houska tweeted at the end of July.

But Houska didn't have to wait much longer, because her baby arrived just weeks later.

Houska delivered her baby just before her reported due date. This is because Houska had delivered both of her babies before 40 weeks or when her pregnancy came to a full term. In a tweet, Houska revealed to fans that she gave birth to Aubree eight years ago when she was 35 weeks pregnant. Her son also arrived early when she was 37 weeks pregnant. So, her third delivery fell in line with her previous deliveries.

Although Houska stated in her pregnancy announcement that she and DeBoer were so excited for the birth of their new arrival, no one was more excited than Aubree, whose own birth was documented on 16 & Pregnant. In May, Houska told E! News that Aubree could not wait for the birth of her baby sister:

Aubree is super excited. She wanted a girl this time so she is so excited and she is so much help. But Watson, he has no idea. We told Aubree right away this time and she knew that we wanted another baby soon, so she was surprised, but she was so happy.

Now that Houska and DeBoer's newest arrival is finally here, you can only imagine how excited Houska, DeBoer, Aubree, and Watson (in addition to their fans) actually are. The best part about her daughter's arrival is that fans will get to see it all play out on the next season of Teen Mom 2 — which might be the most exciting thing of all.

Congratulations to Houska and DeBoer!