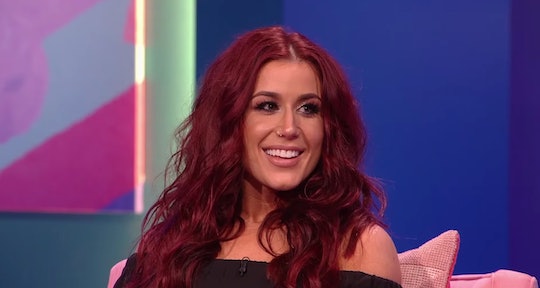 'Teen Mom 2's Chelsea Houska Shared A Sonogram Pic Of Her Daughter, & It's So Sweet

She may have only just welcomed a baby boy a year ago, but Teen Mom 2's Chelsea Houska is already about halfway into her third pregnancy, and she couldn't be more thrilled. After giving birth to her son, Watson, in January 2017, Houska made no secret of her desire to have another child close in age (her first child, daughter Aubree, was 7 years old when her brother arrived), and now it seems that her wish is coming true. Chelsea Houska shared a sonogram pic of her daughter on Instagram recently, and it's clear that she's one super excited mom-to-be.

Both Houska and her husband, Cole DeBoer, took the opportunity to share the 3D image with their followers, and though there's still a fair bit of time to go before the baby girl's September due date, it seems like the couple is enjoying every minute of Houska's pregnancy. What's no doubt even better this time around though? While Houska admitted that she actually had a really rough pregnancy with her son, according to In Touch Weekly, she says she's now feeling "a hundred times better this pregnancy," and that, actually, her third pregnancy is shaping up to be "almost identical to how [she] felt with Aubree" (which is a pretty big deal, given that the 26-year-old was still in high school when Aubree was born).

Houska and DeBoer announced their pregnancy on social media back in March, according to People, sharing a framed ultrasound pic along with the words, "it's a girl" written above it. In the caption, Houska wrote, "....GUESS WHAT! A sweet baby girl will be joining the DeBoer clan in a few short months!" while her husband wrote, “This proud dad is getting a new Bow and it’s nailed my heart."

It definitely didn't take long before the topic of more babies came up: the couple, who wed in October 2016, were already thinking about adding to their brood when Watson was only a few months old — and it sounds like it might not be long until they get to share their next pregnancy announcement. In an August 2017 episode of Teen Mom 2, Houska, DeBoer, and Aubree were attempting to take a photo of their infant son to mark his four-month "birthday," when Houska said that it was giving her "baby fever," and asked, "do you think by this time next year we'll be having another one?" DeBoer hinted that he actually wanted to have two more babies by that time, but said, "We're going to have more when Mom's ready to have more."

Judging by their Instagram feeds, the baby-loving couple is definitely on the same page about parenthood: the bulk of both Houska and DeBoer's posts are photos of Watson or Aubree, with a few beautiful couple selfies and group family shots thrown in for good measure. And even though Aubree isn't actually DeBoer's biological daughter — Houska shares Aubree with her ex, Adam Lind — he regularly shares sweet updates of the two of them together, including one post from February 2016, when he accompanied Aubree to a father-daughter dance at her school.

There's no question that pretty soon, Houska and DeBoer's lives will get even crazier with three kids (and two under 2!), but it also sounds like they're definitely up for the chaos. And honestly, it's so lovely to see how thrilled they are to be expanding their family — especially since now Houska's able to actually enjoy the process.

In the eight years since Houska first made her reality TV debut, she's certainly gone through her fair share of ups and downs. And while she's struggled at times with the challenges of teen motherhood (and single parenthood), she seems to have met her ideal match in DeBoer. So while right now, the couple is focused on their newest daughter's impending arrival, it wouldn't be a huge surprise if there were still many more little DeBoers to come in the future.