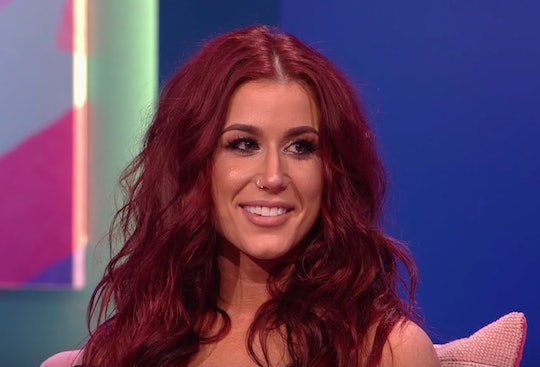 After Teen Mom 2 star Chelsea Houska welcomed her third child, daughter Layne, fans were seriously excited for the reality star. During this past season of Teen Mom 2, they watched as Houska announced her pregnancy and shared her own excitement about the news with her family, friends, and fans. Because of this, its no surprise that Chelsea Houska shared the sweetest message in honor of Layne turning 1 month old.

It's hard to believe that Houska gave birth to her third child (and second daughter) a little over a month ago on Aug. 29, according to E! News. This day was super special for Houska in particular because she gave birth on her 27th birthday.

In the month (and few days) since giving birth, Houska hasn't posted too many photos of her daughter on social media, which makes this one month update even sweeter.

In the photo posted to Houska's Instagram account on Tuesday, Layne looks so cute and wide eyed in her little headband and black onesie, with her hands reaching out to her mom. Houska's caption was just as sweet, and highlights the struggles that moms go through when documenting everything about their third child.

"A feeeew days late (#thirdchild) but holy moly did the month fly by!," Houska captioned the photo.

And in case anyone had any doubts about baby Layne fitting in with Houska's children, 9-year-old daughter Aubree and 1-year-old Watson, the mom of three cleared this up in the caption of the photo. "This little lady fits in perfectly with our family and she is SO loved," Houska wrote.

Fans couldn't help but head to the comments and comment on how adorable the little girl is. "She looks so much like Aubree when she was this small," one commenter wrote.

They're so right — it feels like just yesterday that Houska announced that she was expecting her third child (and second child with husband Cole DeBoer) all the way back in March, as Us Weekly reported at the time. But obviously a lot has changed since then.

After a long pregnancy (which Houska talked about a lot on Twitter), Layne was born in late August.

Although time has flown, it seems like this past month with Layne has gone amazingly well. On Twitter, Houska revealed that Layne has been her "easiest" child.

But at the same time, Houska tweeted that Layne loves to poop at the most inconvenient times. "...every time I finally get the baby swaddled, fed, to sleep and lay her down...She poops," Houska tweeted. "And I have to start all over."

In addition to this, Houska opened up to fans about how she has been struggling with mastitis, or an inflammation of breast tissue, after giving birth, according to People.

Hey, no one said that being a mom of three would be easy (or poop free).

Now that Layne is officially a month old (and Houska's easiest baby) hopefully this means that fans will be receiving more updates like these as the months go by while Teen Mom 2 is off air, because Baby Layne could not be any more adorable.