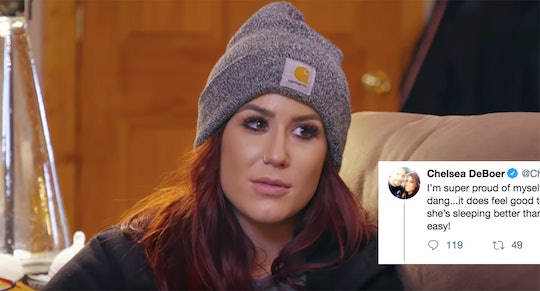 It's always cool to witness an experienced mom lending support to new parents, especially where it concerns more difficult topics. That's why I'm thrilled to see Chelsea Houska's breastfeeding tweet gaining traction, as the Teen Mom 2 star shared some incredible advice with her followers. Not only is her message encouraging, but it touches on a common breastfeeding struggle.

If you've followed Houska's story, then you already know she has been been open throughout the years regarding her breastfeeding struggles, which included a bad case of mastitis after her youngest child, 1-year-old Layne Ettie, was born to her and husband Cole DeBoer in August, 2018.

The reality star has two other kids in addition to Layne (Aubree, 10, and Watson, 2) so she certainly knew the drill about what the demands of caring for a newborn actually mean on a daily basis. But when she was diagnosed with mastitis in her early days of breastfeeding — an infection in which inflamed breast tissue can result in pain, swelling, fever, and chills, according to the Mayo Clinic — Houska wasn't afraid to share she was struggling.

"I never knew it was this awful!" she replied to a fan who declared she'd rather give birth again than live through mastitis. (Having been through both three births AND several rounds of mastitis, I'd say it's draw, but that's just me).

Having survived that challenging stage, her baby is now a healthy and happy 1-year-old. And although she's done with nursing, a development that allows Houska to focus on getting herself "back," she hasn't forgotten the struggles of breastfeeding. Which perhaps explains why she urged one fan to practice self-care during this time without feeling guilt.

"I’m super proud of myself for nursing Layne for an entire year," Houska wrote on her Twitter account today. "BUT dang...it does feel good to be able to focus on getting myself back! AND she’s sleeping better than ever now lol mamas out there...I feel ya! It ain’t easy!"

Fans really, really appreciated her sharing, from those who were having trouble weaning a baby to those who've made it close to a year themselves.

"Always awesome to see someone promote breastfeeding! I could care less how anyone feeds their baby but many moms need encouragement to stick with nursing...it’s not easy!" one person wrote. "Well done on meeting your goal!"

As a survivor of many breastfeeding struggles, I think it's great Houska reached out to fans with words of encouragement. And speaking of struggles, it's clear she's not alone in this department. Recent studies show many U.S. women are having trouble reaching the American Academy of Pediatrics' recommendation to exclusively breastfeed for the first six months of a baby’s life.

Furthermore, "less than half of babies are still exclusively breastfed at three months postpartum" according to HuffPost. This has led to feelings of shame among parents, which is beyond unfortunate. No mom should ever feel bad about not breastfeeding, as no experience is the same.

Clearly, moms need more support in this area — no matter where their breastfeeding might take them — and I'm glad Houska addressed this in her tweet. Way to speak out, mama!