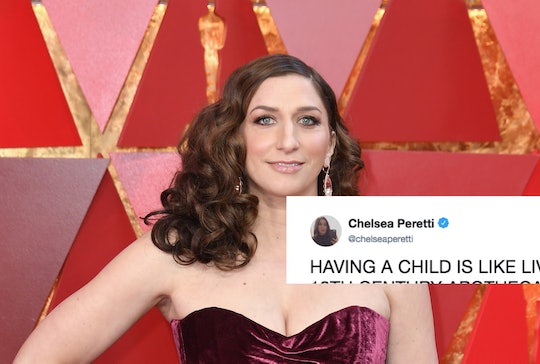 Raising a kid can be overwhelming, but it's easier when you have mom friends who can relate. Failing that, there's always celebrity moms, and no, I don't mean those ones who walk the red carpet two months postpartum and claim that breastfeeding "came naturally" to them, and that the baby weight "just slid right off." I'm talking about the honest ones. If you're looking for some comic relief, you need to follow Chelsea Peretti, whose tweets about having a child are so ridiculously spot-on and funny, you'll be tempted to try and befriend her in real life (if you're still in the hormonal, sleep-deprived period, allow me to be the voice of reason and remind you that you should not stalk her; get some rest).

On Thursday morning, the Brooklyn Nine-Nine star posted a string of tweets with the most bizarre historical reference I've ever seen. I can't imagine how this popped into her head, but it's so true: "Having a child is like living w an 18th century apothecary," she wrote. I mean, props for even knowing how to spell that, TBH. She continued, "Open books and potions on every surface!! Multiple serious research projects always simultaneously afoot at any given moment."

You don't even need to have a child to know how true that is; if you've ever walked into a Babies "R" Us (RIP), you're familiar with the outrageous amount of accoutrements little ones require. Well, "require" might be a bit of a stretch — you don't actually need a bottle warmer, I swear — but all those lotions and creams piled up on the changing table can make it seem like the diapering process is some sort of complicated science experiment. When should you use Desitin and when should you use Butt Paste? How do you deal with that umbilical stump? And what's the deal with baby powder?

That, of course, is where the books and research projects come in, and as a parent of a big kid, I'm sorry to tell you that it doesn't end once they can walk and talk and use the potty all by themselves. While parents' early research is usually limited to "how do I get this kid to sleep," or "what do different cries mean," there are still plenty of questions once they're older, because they're still humans, and humans are complicated. Next, it'll be "how to help my daughter make friends" or "ADHD symptoms." But I'm being a bummer. That's why you need to follow Peretti.

When you're changing your 10th diaper of the day or trying to find a decent day care you can actually afford, it might lighten things up a bit if you imagine you're an old-timey half-pharmacist, half-wizard, furiously mixing up mercury and arsenic to cure a case of "bad humours" or demon possession. Just don't get carried away, because I can totally see bloodletting or trepanation becoming the newest dangerously stupid health trend that humans resurrect as we continue our path of devolution.

Peretti has been entertaining fellow moms with her hilarious real talk even before she had her son, Beaumont Gino, with husband Jordan Peele. Back in May 2017, when she was nearly eight months along, she went on a Twitter rant warning people that if they commented on her pregnant body, she'd give it right back to them, complete with examples such as "UR PANTS LOOK HEMMED AT A WEIRD LENGTH" and "U LOOK LIKE U GOT A PERM IN THE 90s." I'm dying. And now, I can't wait until Beaumont's in elementary school, because can you imagine what Peretti will have to say about the PTA? Get the popcorn ready.