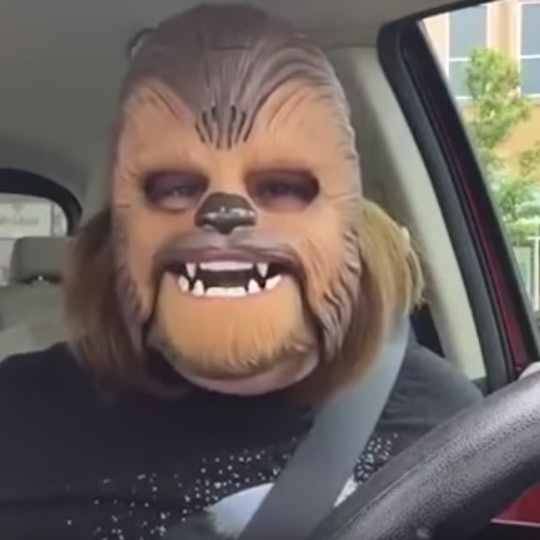 Chewbacca Mask Mom Gets Masks For Her Kids, & It's Totally Heartwarming

It was the wookie mask that won the Internet! When Texas mom Candace Payne first posted a Facebook Live video of herself trying on a Star Wars Chewbacca mask she bought from Kohl's, she had no idea that it would become a viral sensation. The clip showed Payne laughing hysterically after putting on the mask, and the funny video with the sweet reminder that "it's the simple joys in life" became a huge hit — not only has it been viewed more than 110 million times, but it has earned the title of the most-watched Facebook Live video ever, according to Us Weekly. But that wasn't the only surprise in store for Payne. After initially admitting on the video that she wasn't planning on sharing the mask with her family, Kohl's surprised Payne at her home, giving the 'Chewbacca Mask Mom' masks for her kids, too. Talk about a happy ending to an already very happy story.

After hearing about the success of Payne's video, representatives from Kohl's filmed their own video, showing up with armloads of Star Wars toys (and, of course, more masks!) for Payne, her husband Chris, and their two children. But they also made sure to give Payne a special thank you. After her video went viral, sales of the mask went through the roof at Kohl's stores, and sold out completely online. So they also gave Payne $2,500 in gift cards to the store, and 10,000 reward points for being a loyal, Kohl's-loving customer.

Kohl's posted the video of its surprise to its own Facebook page, and explained that "Candace made the Internet's day, so we wanted to make hers. Chewbacca masks for the whole family (and a little extra too)!" While Payne's giggly video was entertaining to watch, it's clear that her message — to enjoy the little, happy moments — really resonated with people, and comments flooded the Kohl's Facebook page with support for Payne and her family.

AWESOMENESS!!! She made me smile so much today! I know she's smiling even bigger today! Congrats Candace! The Force is with you for sure!!!

Best video I've ever seen on social media. Made my day! I'm keeping it around so I can go back to it on not so good days to cheer me up! Thanks for sharing and way to go Kohls!

Awesome sauce !!! That video is is totally what the internet needed! It was hilarious ! Her excitement was contagious!😂😂😂 way to go Kohl's!

Payne also made an appearance on Good Morning America talking about the surprising effect her simple video has had on others, and how something powerful had come out of one little Star Wars mask:

I guess it really is the little things, after all.