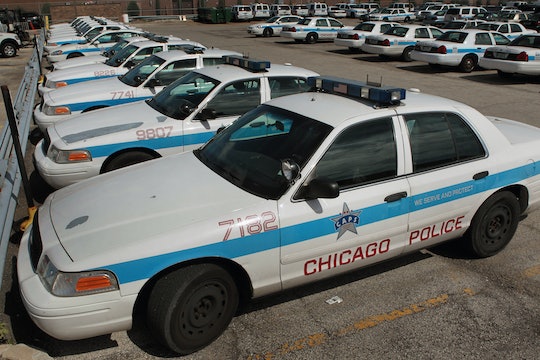 Just 24 hours before camera footage is set to be released of Officer Jason Van Dyke shooting 17-year-old Laquan McDonald, Van Dyke has been charged for murder. As the Cook County State Attorney's office confirms to reporters, Van Dyke turned himself in Tuesday, over one year after McDonald's shooting.

Van Dyke was on duty when McDonald was shot 16 times in October 2014 in the Southwest side of the city. According to The Chicago Tribune, dash cam footage of the police officer shows him jumping out of the squad car, shooting the teenager, and continuing to fire even after McDonald was subdued. (Five other police officers on duty did not fire off any rounds, according to reports.) Van Dyke's lawyer, Daniel Herbert, had contended that the officer was within his rights and had feared for his safety during the incident with McDonald, who police say had a knife. (McDonald had PCP in his system at the time of his death, according to an autopsy) Herbert also claims the police footage does not adequately outline the entire confrontation between Van Dyke and McDonald. Said Herbert:

I can't speak why the [other] officers didn't shoot. But I certainly can speak to why my client shot, and it is he believed in his heart of hearts that he was in fear for his life, that he was concerned about the lives of [other] police officers.

Herbert has not yet responded to Romper's request for comment.

Though we've had to rely on reports of the footage, the public will soon be able to see it as well — the Chicago Police Department was ordered by a judge to release the video one week ago, despite the city's earlier protests to do so. (It had claimed releasing the video would disrupt the investigation into the matter.) Mayor Rahm Emanuel, who had opposed the video's release, has called for peaceful demonstrations once it hits airwaves and has still denounced its contents:

There is no justification and it’s profoundly hideous, in my view. And it’s a shock to your conscience of what happened, and it should not have happened.

And even McDonald's family worries the video's release will lead to violence akin to what we saw in Ferguson following the 2014 shooting of Michael Brown. As the family's lawyer said, McDonald's mother "is not looking forward to the day this is released.

It has been almost 35 years since a Chicago police officer has been charged with murder while on the clock.

If convicted, Van Dyke faces at least 20 years in prison.