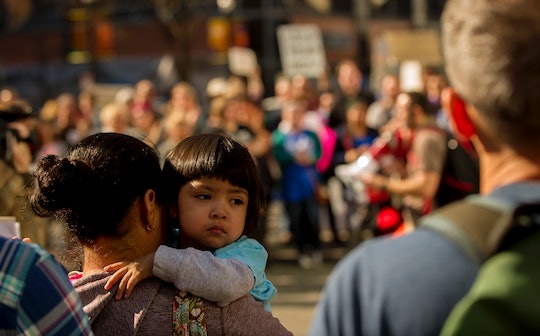 Since the election, it's been a scary time for many who are worried about the repercussions President Donald Trump's vow to crack down on illegal immigration could have on their families. Now, with reports of big raids being conducted by the Immigration and Customs Enforcement agency (ICE), some communities are taking protective measures. On Tuesday, public schools in Chicago said immigration officials can't enter buildings without warrants, and offered worried parents some tips in case they were detained.

The new guidelines came from Chicago Public Schools Chief Education Officer Janice Jackson, who told principals to deny federal immigration authorities access to their buildings without a criminal warrant. Jackson also asked principals to communicate to parents that they should add some extra emergency contacts to their children's lists, in case the parents themselves were detained. The guidelines also instructed principals not to share student records with officials.

Jackson's message went on to say,

While many of our families have serious concerns and anxiety about recent federal actions and statements, we want to make sure that parents know school is a safe place for all students regardless of their race, ethnicity or country of origin.

Recently, rumors have swirled that ICE might be targeting schools, although schools are listed as "sensitive locations" on the ICE website, meaning that they are generally supposed to be avoided, except for in "extreme circumstances." ICE spokespersons did not immediately respond to Romper's request for comment.

Regardless of the veracity of the rumors, the mere fact that they exist has apparently been enough to cause many students to stay home from school, in fear that ICE might conduct a raid at the school itself, detain parents who are waiting to pick children up, or take parents away while children are off at school.

Undocumented children and teenagers are legally allowed to attend public primary and secondary schools, as decided in the 1982 Supreme Court case Plyler vs. Doe. And on Tuesday, the Trump administration released guidelines saying that "dreamers" brought to the United States as children will retain the same protections they received under President Barack Obama, although the administration will otherwise get tougher about deportations.

Chicago is not the only city taking action in the face of the new worries. Cities like Los Angeles, Portland, Seattle, and Denver have all addressed the fears about deportation in recent days, with Los Angeles public schools voting to not let ICE agents onto school grounds without clearance.

Despite efforts to quell fears over new deportation rumors, fears continue to mount. Moves like those made by the Chicago Public Schools system are just one way communities are learning to cope.