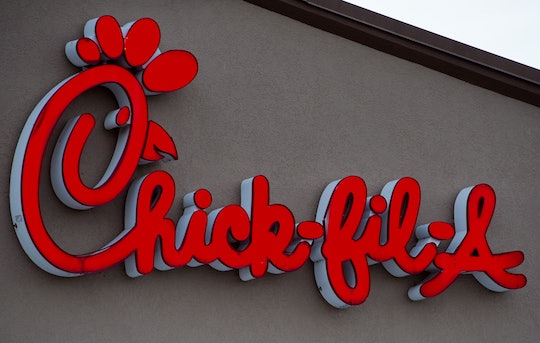 "We Need To Be Clear About Who We Are": Chick-Fil-A Cuts Ties With Anti-LGBTQ Groups

On Monday, fast food chain Chick-Fil-A announced it will stop donating to anti-LGBTQ organizations following years of backlash, as Bisnow reported. The company also revealed it will shift focus to promoting three key initiatives, and will "exclusively" support groups raising awareness for these specific causes.

Starting in 2020, Chick-fil-A will no longer give money to controversial organizations like the Salvation Army, the Fellowship of Christian Athletes, and the Paul Anderson Youth Home, Chick-fil-A President and Chief Operating Officer Tim Tassopoulos confirmed in an interview with Bisnow. All of the aforementioned organizations have been criticized in the past for promoting anti-LGBTQ messaging and discrimination tactics, leading to numerous boycotts of the chain throughout the years.

The Fellowship of Christian Athletes, for example, reportedly has its members follow a “Statement of Faith" which categorizes "homosexual acts" as "sexual sin," according to Outsports. And there are numerous reports of the Salvation Army and the Paul Anderson Youth Home promoting anti-LGBTQ views.

“There’s no question we know that, as we go into new markets, we need to be clear about who we are,” Tassopoulos said in an interview with Bisnow. “There are lots of articles and newscasts about Chick-fil-A, and we thought we needed to be clear about our message.”

Going forward, the company will focus its attention on education, homelessness and hunger. To achieve these goals, it plans to donate "$9M to organizations like Junior Achievement USA to support education, Covenant House International to fight homelessness and community food banks for its hunger initiative in each city where the chain operates," according to Bisnow.

Additionally, the chain says it will give $25K to a local food bank "each time it opens a new location."

Tassopoulos told Bisnow he hopes the changes will provide customers with more "clarity" about where Chick-fil-A stands as a company.

The Fellowship of Christian Athletes, Paul Anderson Youth Home, and Salvation Army did not immediately respond to Romper's requests for comment regarding Chick-fil-A's announcement and the controversy surrounding their reported anti-LGBTQ views.

The change in donations is one of the many transformations Chick-fil-A has undergone in recent years, as its first location in Boston, Massachusetts will reportedly open sometime in the near future, according to ABC-affiliate WCVB-TV. And this is a big deal considering the chain's locations are predominantly located in the south.

These shifts have received some positive reviews, with one commenter tweeting about the most recent announcement, "I can now buy #ChickfilA with a good conscious. They are no longer donating to Anti-LGBT groups."

Others, however, have criticized the new decision. Former Arkansas Gov. Mike Huckabee expressed disappointment on Monday, calling out the company for supposedly abandoning its conservative supporters.

"In Aug 2012, I coordinated a national @ChickfilA Appreciation Day after they were being bullied by militant hate groups," he said in reference to the controversy surrounding Chick-fil-A President Dan Cathy's 2012 comments about same-sex marriage. "Millions showed up. Today, @ChickfilA betrayed loyal customers for $$. I regret believing they would stay true to convictions of founder Truett Cathey. Sad."

Although there is some suspicion Chick-fil-A hasn't fully abandoned these anti-LGBTQ organizations, as Senior writer at the American Independent Joshua Israel outlined, hopefully these changes are a step in the right direction.