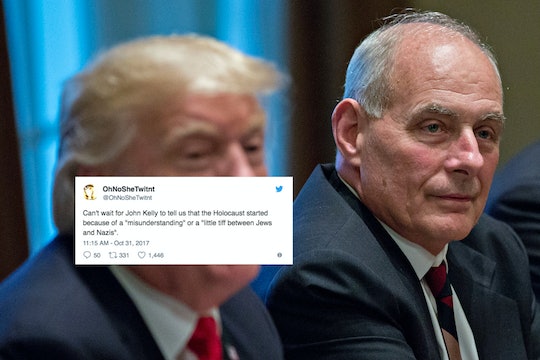 It seems White House Chief of Staff John Kelly has thrust himself into the spotlight yet again with another round of controversial comments. This time, the subject was Confederate leader General Robert E. Lee. On Monday, Kelly shared his thoughts regarding General Lee with the conservative media host Laura Ingraham. Chief of Staff John Kelly said Robert E. Lee "was an honorable man." Yes, really. And the Twitter reactions are so important.

Business Insider reported that Kelly's disturbing statement was made on the premiere night of conservative media host Laura Ingraham’s show on Fox News. Ingraham asked Kelly about a recent decision to remove plaques honoring the confederate general and George Washington at a church in Virginia. "I would tell you that Robert E. Lee was an honorable man,” Kelly told Ingraham, according to the news outlet. “He was a man that gave up his country to fight for his state, which 150 years ago was more important than country." He continued:

It was always loyalty to state first back in those days. Now it’s different today. But the lack of an ability to compromise led to the Civil War, and men and women of good faith on both sides made their stand where their conscience had them make their stand.

Is this guy serious? Are we even talking about the same General Lee? The infamous general of the Confederate army who also happens to be one of the biggest racist icons in American history? According to The Chicago Tribune, documents show Lee not only owned slaves, but he was incredibly cruel to them; he "encouraged his overseers to severely beat slaves captured after trying to escape." I'm having a difficult time deriving "honorable" from what history says about Lee.

It's obvious that Twitter is having none of this nonsense. Christina Wilkie, a political reporter for CNBC, tweeted a simple quote from the controversial interview answer, "John Kelly: 'Robert E. Lee was an honorable man who gave up his country to fight for his state."

Most of Twitter was rightfully horrified. "OK, anybody who still believes John Kelly is a noble veteran tolerating Trump to save the country needs to have a 'come to Jesus moment,'" one Twitter user replied to Wilkie.

"John Kelly sounds more and more like a racist," another person replied.

Yet another person chimed into the conversation with this fantastic GIF of a llama who is just so done with everything.

Still another hits the nail on the head with a disturbingly graphic mental image. "All glimmers of hope were pissed upon tonight like Russian hookers in the Ritz Carlton circa 2013," a Twitter user who goes by Middle-Age White Guy wrote.

In all seriousness, though. What the actual f*ck. General Lee is not someone our nation's leaders or advisers to the president should be idolizing. Unfortunately, this is our current reality.

The Washington Post reported many people had thought of Kelly as the one person in the White House that most exuded discipline and order. And that could have very well been wishful thinking, but many liked to at least hope Kelly might not share many of Trump's backwards views. However, it's clear by this recent revelation that his philosophies are just horrifying as our president's.

The former Marine general also made headlines amid the recent controversy involving Trump's statements to Gold Star families. The Washington Post reports the president had told a window in a condolence phone call that her husband — who was killed in an ambush in Niger — "knew what he signed up for." Trump denied these claims, essentially calling her a liar. And Kelly backed him up.

Except, as it turns out, there were more than three people in on the call. Rep. Frederica S. Wilson of Florida, who was also listening in on the phone conversation, confirmed Trump's insensitive words. Kelly blasted Wilson during a White House briefing, according to The Washington Post, saying, “It stuns me that a member of Congress would have listened in on that conversation. It stuns me. I thought at least that was sacred.”

What's more, is Kelly told Ingraham on Monday that he didn’t believe he had anything to apologize for. Cue: Eye roll.

What little hope Americans had of John Kelly serving as a force of order and discipline in the White House are now shattered, burned and buried. And I can't say I'm surprised in the least.