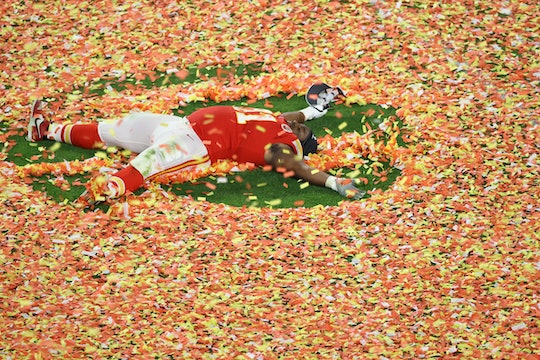 It's not out of the ordinary for winners of major sports titles to make monetary donations following their victories, but one Super Bowl champ has taken it one remarkable and sweet step forward. Following his Super Bowl win on Sunday, Kansas City Chiefs' Derrick Nnadi decided to pay the adoption fees for all the adoptable dogs at an animal shelter in his team's city and just won high praise in the eyes of animal lovers all across the nation.

KC Pet Project in Missouri announced following the Super Bowl that the 23-year-old defensive tackle for the Kansas City Chiefs paid the fees for all adoptable dogs that are currently at the shelter. "We are so excited to announce that the Kansas City Chiefs defensive tackle, Derrick Nnadi is choosing to celebrate the Super Bowl win by paying for the adoptions of all the adoptable dogs currently at KC Pet Project! We have had an amazing, season-long, partnership with Derrick and he couldn’t have thought of a better ending," KC Pet Project wrote on its social media channels Sunday evening. "This partnership has been sponsored by the Derrick Nnadi Foundation."

The shelter later clarified via Facebook for those inquiring about specifics, "The special is good until all dogs that became available by today's date are adopted!"

Plenty of people who weren't even football fans instantly became fans of Nnadi after hearing the news. One person tweeted, "I don't follow football, but I'll be damned if I'm not a fan of yours now!! THANK YOU for being a REAL MAN!!!! Another Twitter user chimed in with, "Raiders fan here and now @DerrickNnadi is my fave NFL player.

Meanwhile, Nnadi himself shared the post via Twitter, declaring, "The perfect way to cap off this great season."

Just in case you weren't already completely enamored with Nnadi and convinced he's an all-around great guy, allow me to point you in the direction of a photo of his celebration following the Chiefs' win. Because it's just so pure.

Yes, he's lying on his back making confetti angels in the middle of the football field. And yes, you can bet this non-sports-fan now has a favorite NFL football player. His name is Derrick Nnadi.