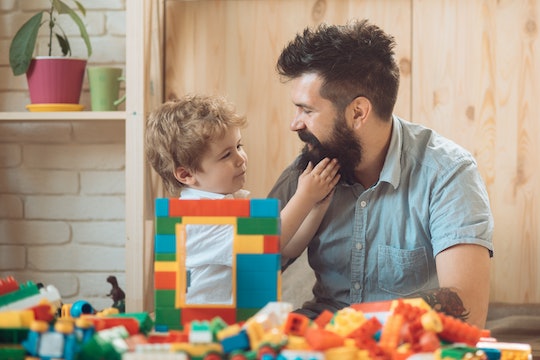 Bearded Fellas, Science Says This May Be Why Kids Are Suspicious Of Your Stubble

Facial hair has been a burgeoning style trend in recent years. Hipster fads aside, though, facial hair has historically been popular for men both as a means of function (staying warm in colder climates) as well as utility (attracting potential mates). Though everyone has their own opinions on whether or not they are appealing, if your child is afraid of beards or seems suspicious of them, new research has found they're not alone.

According to a recent study from the University of Queensland in Australia, published in Evolution and Human Behavior Journal, kids generally find beards to be "strong," but "unattractive" until they reach young adulthood, at which point they become more appealing, as NPR reported. To get to their findings, researchers presented pairs of faces, both bearded and clean-shaven, to 470 kids and young adults, between the ages of 2 to 17 and 18 to 22. Study participants were then asked to judge certain traits of each individual, such as attractiveness and parenting quality.

The study found that young children associated those with beards as having more "dominance" than others, meaning that they seemed stronger, or more assertive. However, they scored low on "potential mate" attributes, suggesting that the kids also found them unattractive. This trend peaked toward later childhood, and then shifted by young adulthood, at which point beards became more attractive.

Nicole Nelson, a researcher at the University of Queensland in Australia who studies face perception, told NPR that these findings suggest kids' opinions on beards are probably dependent on a couple factors: their relationship to the bearded person and their level of development. "... It seems like probably other people's faces mean different things to children depending on where they are developmentally," Nelson explained to NPR, adding that those perceptions of dominance may come with the caveat of "children being slightly afraid of you."

This isn't the first time perceptions of facial hair have been studied; according to separate research from the Journal of Evolutionary Biology, published in 2017, women overall tend to find men with shorter facial hair — as in, stubble, but not totally clean shaven — to be the most attractive. As for men's perception, a study from 2012, published in the Oxford Journal of Behavioral Psychology, found men viewed "bearded faces as more aggressive," according to Global News.

No matter what you prefer, it's clear that beards are a big part of image and identity. Just consider all of those viral videos of dads who shaved their beards for the first time and proceeded to totally shock their children who couldn't make sense of their faces without it. Whether you rock facial hair or not, it's clear that everyone, including children, form different associations with it, both good and bad. So the next time you catch your baby staring at a bearded man, they probably either find them strong or unappealing — or they're coming up with an entirely different opinion of their own.