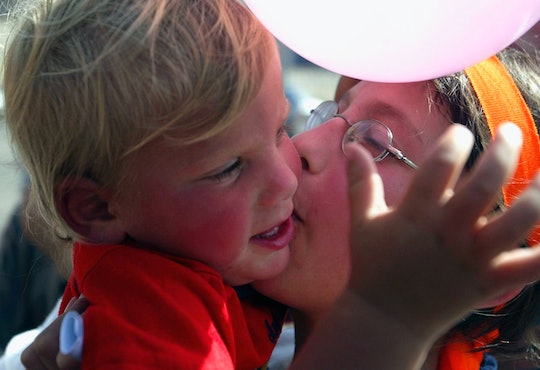 My toddler son is pacing back and forth behind me in the kitchen as I write this. He stops near the oven and looks up, then turns and walks away. He's now at his high chair, eating a veggie fry I made him for lunch. This is our typical weekday — me hunched over my laptop, him bouncing around the apartment, never too far away. If I could afford to, though, I would enroll him in daycare. Research has proven that daycare benefits kids greatly. In fact, a new study found that child care actually helps mothers and the sons they raise.

According to The New York Times, the study, published by the University of Chicago, showed that high-quality child care can have a tremendous impact on success in your adult years. The researchers analyzed long-term data from two experimental programs in North Carolina that provided black single mothers with free, full-time care for their children, ages 8 weeks to 5 years. They discovered that kids who were enrolled in those programs earned more as adults and were healthier than the children in the control group (those at home or those who had lower-quality care).

... engaged more in the work force, they’re now active participants of society, they’re more educated, they have higher skills. So what we’ve done is promoted mobility across generations.

The benefits of high-quality care were most evident among boys, according to the New York Times. Compared to the control group, boys in the programs had about six more months of education and earned an average of $19,800 more a year when they reached 30 years old; girls who attended programs made about $2,500 and had two more years of education by age 30, the study found. Researchers also found that men in their mid-30s who were enrolled in the experimental programs were 33 percent less likely to use drugs, be arrested, and have high blood pressure.

So why does high-quality care impact boys from low-income households more? It could be because they are more vulnerable to the effects of poverty, and are more responsive to early childhood intervention. In 2015, researchers from Northwestern University published a study that found boys from low-income families had higher rates of truancy, cognitive disability, and behavioral problems than their female counterparts. They also discovered that boys were less likely to graduate high school and more likely to commit crimes as kids.

But, time and time again, research has shown that access to high-quality child care has positive impacts on children's behavior, emotions, and financial futures. As the Center for American Progress found, this is particularly true for kids raised by working mothers.

High-quality and affordable child care makes it easier for working parents to work and become more engaged in their children's lives. A 2012 study from the University of Texas at Austin found that working mothers whose children were enrolled in "high-quality nonparental care" were more likely to have greater involvement in their children's school, according to TIME. That means they became more connected to their kids in a positive way.