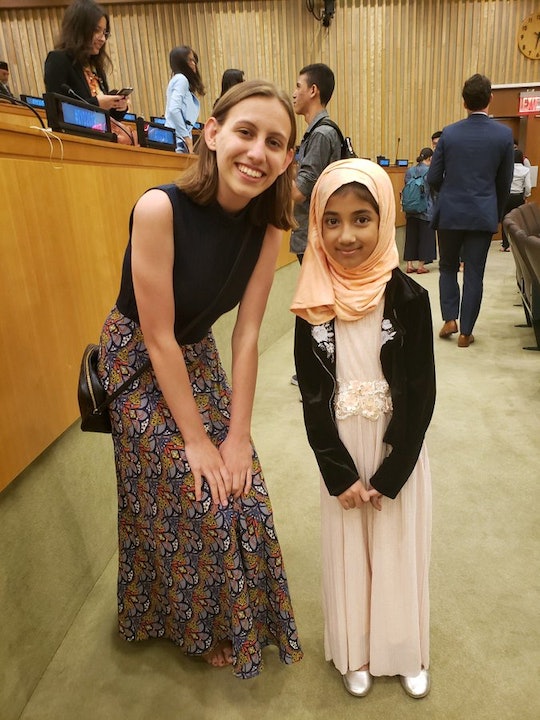 "My hometown was very close to Paradise, so we ended up getting a lot of the smoke, and at one point it was the worst air quality in the world," says child climate activist Alexandria Villaseñor of visiting family in California during the 2018 Camp Fire.

"[The smoke] was seeping onto the house, so I had to roll up towels and put them under windows and doors," the 14-year-old recalls to Romper over the phone. Villaseñor says people were handing out face masks, but she later realized that those masks couldn't protect people from breathing in the harmful particles created from the fire.

"That was kind of my first experience on how we aren't prepared for the effects of the climate crisis and how to protect ourselves."

Villaseñor is one of 16 children who petitioned the United Nations under the Rights of the Child convention in September, calling out five economic powers — Argentina, Brazil, Turkey, France, and Germany — for failing to adequately address the growing threat of climate change.

"With this complaint, what’s so important, that even though there are 16 children in total, we’re doing this in solidarity with children all over the world," says Villaseñor, who filed the complaint alongside Swede Greta Thunberg, an indigenous activist who lives in Alaska, and 13 other children from around the world. "We want them to see how their rights are being violated, and make them feel like they can go out and have a voice, too."

"I never expected myself to be a climate activist," she says. "I’m a first-generation activist in my family, so this is sort of something new for me to even be doing, and it’s new for my family to see me be doing."

Adults are one of the greatest allies in the youth climate movement because they can really support us, they can advocate for us, and they can protect us when we’re out protesting, so with the adult support it really amplifies the youth’s message.

Her activism came out of the ashes of California's deadliest wildfire. The smoke from the Camp Fire exacerbated Villaseñor's asthma, and her family sent her back to New York City earlier than planned. "That's the point that I really started getting upset," she says.

After researching wildfires, Villaseñor started to see the connection between the climate crisis and the growing intensity and frequency of California's wildfires. "That made me want to do something and really take action," she explains, "because I saw how communities all around the world were also being affected, not just mine."

While Villaseñor was determined to do something, she wasn't exactly sure where to start. Then she heard then 15-year-old Greta Thunberg speak at the 2018 United Nations Climate Change Conference.

"Seeing her had really empowered me and made me know what I had to do," Villaseñor says. On December 14, 2018, she participated in a school strike in front of the UN headquarters in New York City — her first action as a global citizen, and one that continues: "I have been on school strike every Friday for the past 42 weeks."

"Earth Uprising was founded after organizing the past three global climate strikes, and seeing how a lot of students weren’t getting involved in taking global climate action because they didn’t understand why it was important," Villaseñor explains. "[When] students knew the climate science, then they really did feel empowered. I noticed more students would come out and take action once they understood the science."

We’re threatening to climate deniers by how loud our voices are.

From peer-to-peer education, working with colleges to incorporate climate education in their curriculums, to appointing and working with global ambassadors ("We have ambassadors in over 50 countries and they really focus on getting that climate education in their country, and we have ambassadors in the global south who are really experiencing the effects of the climate crisis right now."), Earth Uprising works to engage and educate young people around the world, who are feeling the effects of climate change right now.

"It’s very frustrating that people in power and world leaders never took action on the climate crisis soon enough, and it was really left on my generation’s shoulders," Villaseñor says. "Children from all around the world are experiencing the effects of the climate crisis and it’s become their new normal. They're just trying to protect themselves and survive."

And Villaseñor wants to emphasize the coalition of child activists involved in the U.S. and around the world. Media coverage of the UN petition focused predominantly on Thunberg, and sometimes Villaseñor, so Villaseñor sent out a tweet reminding people that the movement was more than just one or two kids big.

Of course, with that attention does come vitriol and vicious attacks from those who don't view climate change as an existential threat. "There [are] a lot of climate deniers that have been targeting the student climate strikers and the climate activists," Villaseñor says.

From the president of the United States, who mocked Thunberg via a tweet, to a Fox News guest, who called Thunberg "mentally ill," to counter-protestors at Villaseñor's climate strikes, youth activists have been met with as much resistance as they have praise.

"What I've found is, with supportive parents, it really helps make a lot of this possible," she says. "Adults are one of the greatest allies in the youth climate movement because they can really support us, they can advocate for us, and they can protect us when we’re out protesting, so with the adult support it really amplifies the youth’s message."

When we solve the climate crisis — because we will — or when we mitigate it, I can see myself doing [something in] another area of humanitarianism.

At 14, Villaseñor does have plans beyond climate activism; plans she hopes she will one day have the ability to pursue.

"I’ve always viewed myself as a humanitarian," she says. "So when we solve the climate crisis — because we will — or when we mitigate it, I can see myself doing [something in] another area of humanitarianism."

But she knows that, for now, her work is far from over.

More Like This
Viral Hives In Children: What Doctors Want You To Know
I Had Bariatric Surgery & Can Say The New AAP Guidelines Will Harm Kids
A Parent’s Guide To Stomach Pain In Kids
Amoxicillin Rash: Is It Really An Allergy? Doctors Explain
What Parents Are Talking About — Delivered Straight To Your Inbox