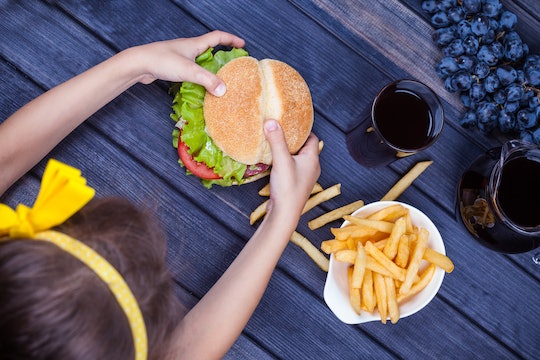 Childhood Obesity Rates Are Soaring Across The Globe

On Tuesday, the Lancet published some unsettling research about childhood obesity worldwide. According to scientists who have analyzed data compiled over the past 41 years, childhood obesity has risen tenfold across the globe. It's a disconcerting statistic, especially when you consider all the recent efforts made to reduce this complex health issue. The good news is there are still plenty of opportunities for countries to address childhood obesity in meaningful ways.

In 1975, Majid Ezzati, a professor of global environmental health at Imperial College London, brought together a team of scientists to study childhood obesity rates in 200 countries. For 41 years, the group, led by Ezzati, documented the height and weight of nearly "31.5 million 5 to 19 year olds," according to Forbes. From there, Ezzati and his team calculated the body mass index (BMI) of each child.

According to the Centers for Disease Control and Prevention, "BMI is calculated by dividing a person’s weight in kilograms by the square of height in meters." For children and teenagers, "weight status is determined using an age- and sex-specific percentile for BMI rather than the BMI categories used for adults," according to the CDC. If you're wondering why the BMI of a child is calculated differently than an adult, this is because children's bodies are constantly in flux until they reach adulthood.

As for why a healthy BMI is important to have, a high BMI could lead to "heart disease, diabetes, and certain cancers" down the road, according to SFGate. Conversely, a low BMI could indicate that a child is malnourished or that their body isn't properly absorbing nutrients.

While average BMI among children and adolescents has recently plateaued in Europe and North America, this is not an excuse for complacency as more than one in five young people in the U.S. and one in 10 in the UK are obese.

To understand why the United States is not making much progress on childhood obesity, it's important to realize that there hasn't been enough initiatives to tackle the issue throughout the years. Although Michelle Obama started the Let's Move! campaign, which she is still active in, to reduce childhood obesity rates in the United States by 5 percent in 2030, the United States has mostly glossed over this epidemic. Prior to the launch of Obama's initiative in 2010, the U.S. Agriculture Department had not set new nutritional standards for school lunches in 30 years, according to Modern Health Care. Considering school meals are where a lot of American children get most of their nutrients from, this is a very important area of concern. Unfortunately, in May 2017, the Trump administration announced it would "suspend sodium reduction requirements and whole-grain requirements as well as allow 1 percent fat flavored milk back into school cafeterias nationwide," according to ABC News.

The positive side to all of this, however, is that plenty of Americans are working together and are committed to reducing childhood obesity rates. One of the organizations bringing together concerned parents and citizens is Action For Healthy Kids. The organization's goal is to "mobilize school professionals, families and communities to take actions that lead to healthy eating, physical activity and healthier schools where kids thrive," according to Action for Healthy Kid's website. If you visit the website, you can find how to volunteer or fundraise for the organization in your state, and you can also find resources to incorporate healthy habits in schools.

Of course, this organization is just one example of how childhood obesity is not a lost cause in America or across the globe. Parents, educators, and other stakeholders have the power to ensure that all children lead healthy lives.