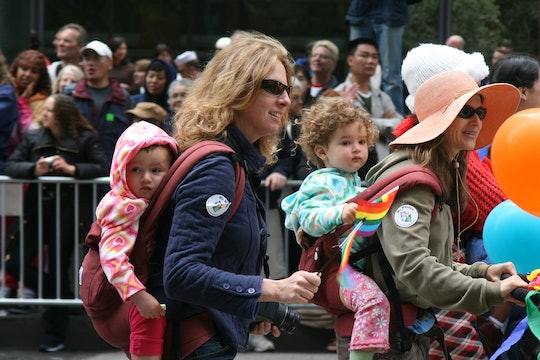 Despite the cries of outrage from conservatives, same-sex parents are just as capable of raising healthy, well-adjusted children as their opposite-sex peers, according to a study published this month in the Journal of Developmental and Behavioral Pediatrics. That may not be news to most of the world — Slate has identified at least 73 peer-reviewed articles that debunk the idea that gay parents somehow harm their children — but the findings from the latest same-sex parenting study are important for another reason. The study offers the first apples-to-apples of a group that represents the whole population. In short, it’s almost the perfect counterargument to those who say that same-sex parenting is bad for kids.

The primary reasoning behind opposing earlier research in support of same-sex parenting was that the studies were skewed. According to ThinkProgress, critics argued that, because researchers had to advertise for participants, the participants were self-selected. Some argued that methodology led to biased samples.

So, researchers at the UCLA School of Law’s LGBT think tank, the Williams Institute, studied intact families on a larger scale using data from the National Survey of Children’s Health, a nationwide telephone survey of children’s health and well-being sponsored by the U.S. Department of Health and Human Services. Researchers identified 95 same-sex couples who were parenting children and match them against demographically similar heterosexual couples.

The research uncovered no differences between the children in the areas of general health, emotional health, coping skills, or learning, according to the summary on the JDBP website. The only difference researchers were able to uncover was that children with same-sex parents were under a great deal more stress than their peers. That factor alone should have led to worse outcomes for kids with gay parents, according to the ThinkProgress report. Instead, the researchers suggested it meant something even more promising about LGBT families: the parents were more likely to reach out for support from parenting groups and counseling services.

But despite the solid science in support of equality, some conservative and religious groups are in continued opposition. University of Texas sociologist Mark Regnerus has been perhaps the most vocal critic of the research. Regnerus has argued against marriage equality and parenting rights for gay couples based on the idea that it somehow placed children in jeopardy. Regnerus’s own research findings — that children of gay parents fare worse than those with straight parents — have been widely discredited for comparing outcomes in kids whose same-sex parents had divorced to those whose opposite-sex parents had stayed married. The irony is that the rigorous anti-gay parenting crusade is more harmful to kids than anything they’d otherwise experience at home, according to research published by the University of Nebraska and the University of Pretoria in South Africa:

With the science firmly in support of equality, researchers can finally turn to proactively studying the impact of that kind of stigma, Slate reported. Future studies will need to focus on the stressors unique to parenting within same-sex households, said Columbia Law School’s LGBT research institute director Nathaniel Frank in an interview for Slate:

What’s needed is research that no longer reacts to anti-LGBT challenges to equal treatment, but instead serves the health and well-being needs of the underserved LGBT population.

There’s no doubt that those against equality will continue to argue against it. But the science gives ample reason for optimism: it just became far more difficult to criticize same-sex parents based on anything other than personal prejudice.