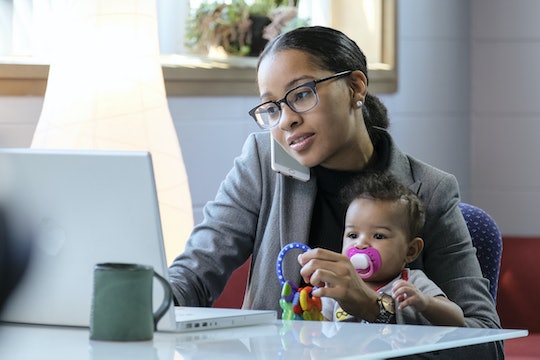 Whether it's out of financial necessity or simply because they love their careers, a lot moms are made to feel guilty for working outside the home. But there's no need to worry that flouting societal traditions or perceived biological imperatives will negatively impact your kids. In fact, children of working moms turn out just fine, according to a newly updated study.

When comparing surveys of 100,000 men and women from 29 countries, Harvard professor Kathleen L. McGinn found "no significant associations between maternal employment and self-reported overall happiness for men or women," so how about we all, as a society, stop letting people tell you that your kids will grow to resent you one day, OK?

In fact, adults who were raised by a working mother enjoy some added benefits. I hate to feed into the ridiculous "mommy war" trope, so let's be clear that this isn't an indictment of stay-at-home moms. As a mom I've stayed at home, worked outside the home, and worked from home, so I'll tell you right now that all three are valid choices and they're all hard but rewarding. That being said, working moms tend to get the most crap for their choice (assuming it even was a choice), so I think they deserve a win right now, and McGinn's analysis delivered a big one.

It turns out that having a "strong female role model" who's modern and empowered and all that jazz really does count for something. Women whose mothers worked "are more likely to be employed and, if employed, are more likely to hold supervisory responsibility, work more hours and earn higher incomes than their peers whose mothers were not employed," so even if your retirement package isn't all that impressive, it's all good because your little girl will totally pull in enough bank to put you up in the swankiest of nursing homes when the time comes, and she's got you to thank for it.

Sons of working moms don't get a leg up in the business world (to be fair, they're dudes, so they don't need it), but they still grow up to be better for it. They spend more time on housework and childcare than men who were raised by stay-at-home moms, and are more likely to be married to women who are employed. It's unclear if husbands of working moms' sons enjoy the same benefits as wives, but women still do the lion's share of the housework in opposite-sex partnerships, spending nearly an hour more per day than men on cooking, cleaning, and taking care of the kids, according to the U.S. Bureau of Labor Statistics, so again, I'm just happy that the underdogs are getting their due.

It makes perfect sense, when you think about it, that modeling more modern gender roles and equitable division of domestic labor would produce kids who grow up to emulate those behaviors. And it's especially important to do so lately, because troublingly, the number of old-school would-be patriarchs is on the rise, according to Vogue. While 42 percent of high school seniors surveyed in 1994 said that men should be the sole breadwinners while women stay at home, that number jumped to 58 percent in 2014. And worse still, almost 40 percent of the 2014 respondents believe "the husband should make all the important decisions in the family," up from fewer than 30 percent in 1994. Gross.

Of course, I'm not demanding that all stay-at-home moms take off tomorrow and get themselves a law degree or anything like that. Maybe the only jobs you could get would barely cover day care. Maybe you can't bear to let someone else take care of your baby. Maybe you just hate working and would rather chase a toddler all day than deal with screaming customers or TPS reports. It's your life, lady: live it. But your kids can still turn out woke even if you're in a more traditional role, regardless of the reason why. The study also found that "childhood exposure to female employment within society" can be just as beneficial, so as long as your show your daughter that staying at home is just one of many options for women, she'll grow up to be whatever she wants, rather than what society and some retrograde husband demand.