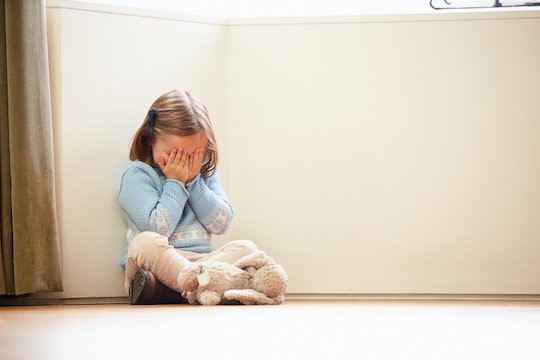 When parents spank their children, they're hoping to teach their children a lesson about behavior — but as it turns out, parents might be doling out another, more negative lesson that they never intended. A new study by researchers at the University of Texas Medical Branch at Galveston found that spanked children are more likely to be violent toward future dating partners, adding a new reason for parents to be wary of corporal punishment.

A survey of more than 750 young adults, carried out over the course of several years, found that those who were spanked as children were more likely to be violent toward future dating partners. Nearly 70 percent of the young adults surveyed reported receiving corporal punishment as kids and almost 20 percent of those adults reported perpetrating violence in their intimate relationship — with a significant link between the two experiences. The correlation held up even when the study's authors controlled for other factors, such as socioeconomic background, sex, parental education, and childhood abuse.

And while the study, published on Tuesday in the Journal of Pediatrics, can only show correlation, not causation, it's a significant link — and one that the study's authors urge parents to pay attention to.

"While we can’t say that spanking causes later violence, it follows that if a kid learns that physical punishment is a way to solve conflict, he/she may carry that over into conflicts with later intimate partners," Dr. Jeff Temple, a professor at UTMB and the senior author of the study, said in a press release.

Last month, an ABC News poll found that 65 percent of Americans approve of spanking kids, a rate of approval that's remained relatively stable since the early 1990s. A full one-quarter of American parents (26 percent) approve of spanking in schools as well, and across the country about half of all parents say that they occasionally spank their children.

Despite parents' steady approval rates for spanking, experts have been warning against physical punishment for some time now. The American Academy of Pediatrics, the American Academy of Child and Adolescent Psychiatry, and the National Association of Pediatric Nurse Practitioners have all recommended that parents pursue alternatives to spanking, which is associated with increased aggression, behavioral issues, and mental health problems in kids.

The study published on Tuesday simply adds another long-term negative outcome to the pile when it comes to physical punishment of children — and it's one that researchers say is unsurprising.

“Evidence is mounting that corporal punishment doesn’t work," Temple tells Romper. "Not only that, but studies such as this one suggest it can actually have negative mental and physical health consequences in the short- and long-term."

In the study, researchers noted that intimate partner violence has been linked to both exposure to violent role models (parents fit in this category) and poor problem-solving skills. If children see their parents — adults that children hold in especially high esteem — modeling violence as an effective way to solve interpersonal problems, they're more likely to use that same approach as they grow up.

"The experience of having someone direct aggression to you increases the likelihood that you'll fall back on aggression when in a flight or fight moment," Emily Rothman, an associate professor at Boston University and an expert in partner violence, told CNN. "Having been hit by the parent can elevate stress and reduces a child's coping skills, so they may lash out."

For parents who spank, it can seem challenging to change ingrained disciplining techniques, but luckily, there are plenty of other alternatives to spanking out there, from time-outs to rational discussions to recruiting some extra help. With a little bit of time and effort, parents can learn how to shift away from corporal punishment towards different techniques — ones that aren't associated with future violence toward dating partners.