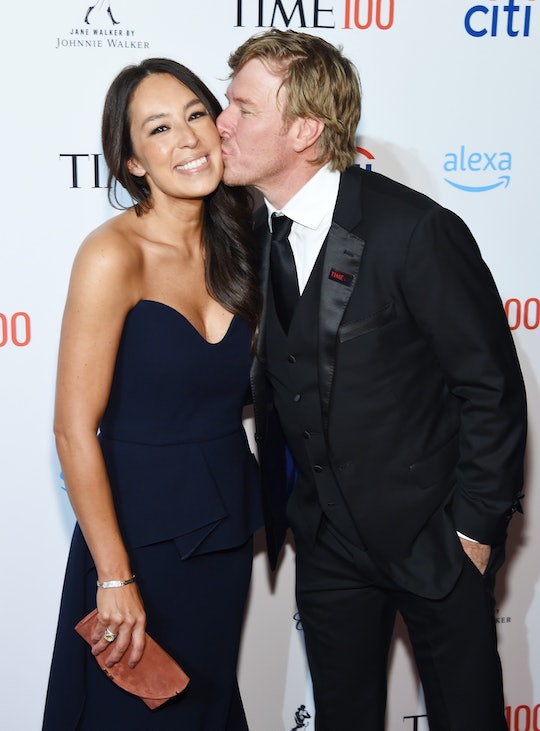 Like All Busy Parents, Some Important Dates Have Slipped Chip Gaines' Mind

Parenting is a process of trial-and-error. No matter how many books you read, seasoned mothers and fathers you consult, or information you think you have, the truth is that raising kids will surprise, challenge, and thrill you in ways you couldn't have possibly conceived, and it's great to hear popular public figures admit that everyone — yes, everyone — is just figuring it out as they go. In fact, in a new interview, Chip Gaines revealed he's forgotten his kids' birthdays and shared that, like so many other moms and dads, he's "made every parenting mistake in the book."

In a recent interview with People, the Fixer Upper star, renovation mastermind and father of five shared that even though he's had a decade and a half of experience, he's well aware that he's made mistakes with his children, and that's OK.

"I made every mistake in the book with Drake and Ella both," he told People. "There’s lots of stories of me leaving kids places I shouldn’t have left them. I’ve forgotten birthdays. Afterward you’re like, ‘I’m the worst person.'"

Gaines shares five children, Drake, 14, Ella, 12, Duke, 10, Emmie, 9, and Crew, 11 months, with his wife Joanna. The two are co-parents and business partners, and have been since they first opened their original Magnolia home decor store in Texas over two decades ago, a move that spurred an entire empire of books, TV shows and other businesses.

However, Gaines also knows that it's important not to be too hard on yourself. "I’m a firm believer that it’s the mistakes that make us who we are. We learn the most from them, and I think that goes for parenting as well," he continued to tell People. "I was a bit more adventurous than maybe your typical first-time father, but like anyone else we were scared to death because you have no idea what you’re doing."

Previously, Gaines had opened up about how prior to meeting Joanna, he was on the fence about children. Once they met, and it "clicked," as he says, the fear turned to logistics. "When you're first having babies, especially when you have parents like Jo and I do, it was all about 'How are you going to afford these kids,'" he told TODAY. "When we had our first baby, our parents said, 'Great!' But by the third they were having these interventions with us like, 'Are you sure you thought this through? How are you going to pay for college?'"

It seems clear that the family probably does not have such financial concerns anymore, but going forward, Chip has been transparent about the fact that what he and his family do for work needs to be authentic. "The more staged something becomes, or the more required something becomes, it boxes me up, and I felt like toward the end of the Fixer Upper journey, I felt caged, trapped. Jo and I couldn’t figure it out," he told Cowboy & Indians magazine in 2018.

The show concluded last year, but just a few months later, USA Today reported the couple are returning to TV with their own home improvement network.

It seems life could not be more exciting for Chip and Joanna, who have not only built a massive empire, but have raised some great kids through it all. They've left us all with the important reminder that it's important to be yourself and to work at parenting, but most of all, it's crucial to accept that we are all human, and just trying our best.