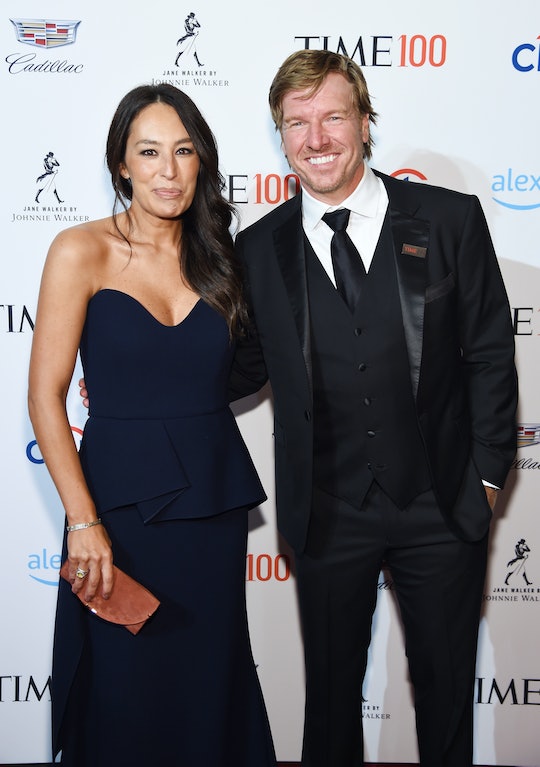 Whether Chip & Joanna Gaines Go For Baby No. 6 Depends On This Key Factor

All couples will disagree at some point or another, a sentiment Fixer Upper alums Chip and Joanna Gaines know all too well. From business decisions to parenting techniques, the Gaineses have had their fair share of squabbles, even where it concerns the topic of having another baby. And although the two always haven't seen eye to eye on this issue, Chip Gaines joked baby #6 might be possible, but only if this key ingredient is in place.

After Joanna delivered the couple's fifth child, Crew, some fans expressed curiosity about whether they'd have another baby. Although it's no one's business, Chip decided to spill the beans while at Inbound, an annual marketing and media summit. Apparently, this possibility rests on whether he and Joanna are in a good spot in their marriage. Makes sense, no?

"There’s a running joke....where any time things are going well between Joanna and I, at the end of that statement, I’ll sarcastically say — used to be sarcastically — ‘No. 5, No. 5,’” Chip told fans Friday, according to Us Weekly on the topic of more kids. “Well, now we’ve got five children. So now, sarcastically, I would say, ‘No. 6, No. 6,’ when things were going well.”

It sounds like Chip hasn't completely closed the door on expanding his family, but is wife Joanna on the same page? She has given a number of interviews about being "surprised" by her fifth pregnancy, but she has also opened up about the joys of giving birth at 40.

“I kid with people, ‘If you ever want to feel young again, have a baby at 40,’” Joanna said, according to TODAY. "It’s brought this whole new thing for me where I’m a lot more laid-back. People joke that I’m the ‘Fun Jo’ now.”

So does so-called fun Joanna want to go for baby #6 like Chip may want to? The answer is unclear, but it's possible she's less eager than Chip.

Exhibit A? On the topic of having more babies, Chip hinted to ABC News in 2017 that Joanna might be less excited than him to "make more babies," stating they have "different answers" to that question.

Translation: It wouldn't shock me if Jo is done with the newborn stage, especially since Crew recently celebrated his first birthday.

Still, it sounds like Chip is eager to add another one to the mix. "This little turkey will only be 10 years old when Emmie is graduating from high school," he told People. "We have to have another one because I’m particular about the only child thing. Don’t be surprised if No. 6 is in the cards!”

But for that wish to come true, Chip needs to get his wife on board. And when the reality star asked where Joanna stood on this issue, he confirmed she "isn't so sure."

Over all, I'm betting against Chip here. This couple seems too busy with their expanding empire and growing family, but I guess fans will have to wait and see how this one plays out.