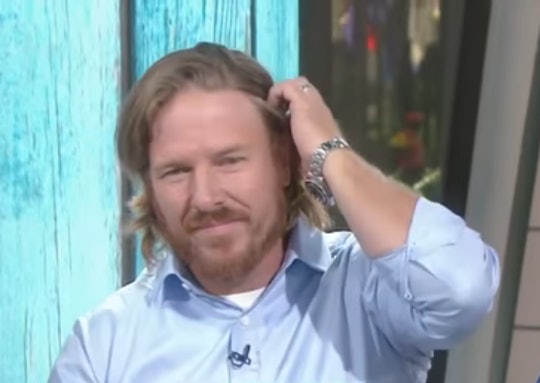 Chip Gaines Shaved His Head, & The Reason Why Will Warm Your Heart

If you were starting to get used to the star of Fixer Upper's long, flowing locks, I've got some bad news for you. Chip Gaines shaved his head, and it wasn't because his wife, Joanna, was tired of sharing her conditioner with him. He's actually fulfilling a promise to his fans, some of whom weren't big fans of the new shaggy, 'do. In July, a photo featuring Gaines sporting a "man bun" caused more than a few followers to lose their dang minds, but the house flipping reality star found a way to turn that tonsorial tempest into a good thing.

Last Thursday, Gaines took to Instagram to offer his fans a deal: "It’s come to my attention that most of you hate my current hairstyle," he wrote, "But how MUCH do you hate it? Now’s the time to put your money where your mouth is." He solicited donations to St. Jude Children's Research Hospital ahead of his planned visit on Sunday, and promised that "the more money we raise over the next FOUR days, the shorter my hair goes," adding, "who knows, maybe if you really exceed my expectations...I'll buzz it all off." It's unclear how much he raised, but based on his new look, he reached his goal.

St. Jude Children’s Research Hospital in Memphis, Tennessee, was founded by entertainer Danny Thomas in 1962. The hospital specializes in treating childhood cancer and other life-threatening diseases, as well as pioneering research to develop cures and prevention tactics. All patients are treated free of charge, and the hospital is funded by private donations. Since St. Jude opened its doors, the childhood cancer survival rate has climbed from just 20 percent to over 80 percent.

But treatment itself is just part of the often-crippling expense associated with childhood cancer and other serious illnesses. When children have to travel for care, parents not only lose wages from taking time off; they also have to pay for travel, lodging, and meals while they're supporting their sick child. St. Jude takes care of these expenses, as well, and families whose kids are at the facility for more than three months stay at Target House, which features 96 fully-furnished, two-bedroom apartments, a library, a playground, playrooms for siblings of all ages, and more.

"We are leaving Memphis changed," Joanna wrote on Instagram on Wednesday. "Thank you for letting us be a part of your home at Target House. We are cheering you on every step of the way." The accompanying photo featured a group of children rubbing her husband's newly-shorn head. Unfortunately, some headlines concentrated more on Chip's hairdo than the reason behind the transformation, which was to help save children's lives. Luckily, fans who want to see how he looks will have to go through Joanna's Instagram post, which deftly puts the focus back on the kids of St. Jude and Target House, where it belongs.

The Gaines are no doubt incredibly busy right now; they just wrapped the final season of Fixer Upper last week, their exclusive home decor line with Target launched on Sunday, and Chip's also promoting his book, Capital Gaines: Smart Things I Learned Doing Stupid Stuff, which was just published last month. It's laudable that they still managed to find the time to visit St. Jude, and that they had the foresight to take advantage of their ever-growing platform in order to help the patients and families there. If you missed out on Chip's call to action, though, it's not too late to help. Don't wait for Chip to threaten to shave his eyebrows; you can donate to St. Jude at any time.