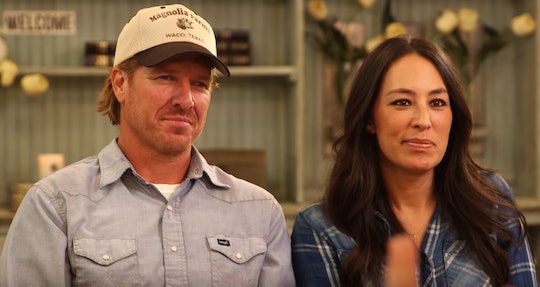 Another day, another reason to love the Gaines family more than life itself. Along with running a working farm, raising a beautiful family, and taking the renovation world by storm, the Gaines are a beacon of light in this too dark world. Most recently, Chip and Joanna Gaines donated baby Crew's SNOO sleeper to an expecting mother who shared her story with them in the comments of an Instagram post. The family was understandably blown away by the Gaines' generosity — especially after they learned how much SNOOs cost — but the act of kindness was par for the course when it comes to Chip and Jo.

A couple of weeks ago, Chip shared a photo of little Crew practically coming out of his SNOO Smart Sleeper with the caption, "Uh oh.. what happens when they outgrow the #snoo??" These handy bassinets are hailed for their ability to sense when babies get fussy and soothe them with white noise and gentle rocking, as explained in the product's Amazon description.

A flurry of commenters provided their recommendations on what to do next, a popular suggestion being that he and Joanna hang on to it in case they decide to have another baby. But one fan had another idea. "Sell it to me!!" user Kelly Claggett wrote. "After 12 years my husband and I are FINALLY expecting!!," according to People. And Chip responded saying, "We’re so excited for you! Let’s get her set up," and tagging his assistant.

A number of Chip's other followers chimed in to gush over the exchange. "This thread made me cry my work makeup right off," one person wrote. "How unbelievably sweet and congratulations on expecting your first little one!" And further down in the comments, Claggett opened up about her journey to motherhood:

We have been trying for a baby for several years. We decided not to do fertility treatments and pray, pray, pray. My mom died out of the clear blue and it was emotionally hard to dream that a baby was going to be in our future ever. Then right before Christmas we found out that after so long we were finally pregnant. Everything is going great. It pays to pray!

As Motherly reported, Claggett later posted a photo to her own Instagram about the interaction — after she and her husband Brad received the SNOO. "I do not feel worthy of any of it," she wrote. "Our baby and family is blessed by this random act of kindness and I'll never stop trying to pay it forward." She echoed these sentiments in a Facebook message to Romper, wherein she said, "[I am] thankful that God put it on Chip's heart to bless us with this gift."

In an interview after the fact, Claggett told TODAY that she and Brad weren't familiar with the magic that is the SNOO or the high price tag that comes with it — ahem, nearly $1,300. "To me it was just remarkable that he would even see my comment or comment back to us, let alone actually give us (a SNOO)," she said. And after they looked up the bassinet, "We were both just floored," Claggett told TODAY.

The odds of commenting on a celebrity's Instagram post and having them read it, much less respond to it, are slim to none. But leave it to Chip Gaines break the mold and respond with such kindness. Chip and Joanna have shown their giving hearts to the world on more than just this one occasion.

In 2016, the couple created The Magnolia Foundation, which raises funds for building family housing, creating youth development programs, supporting orphan care, and community restoration, according to Country Living. And following Hurricane Harvey in October of 2017, the Gaines' volunteered their time and skills to help rebuild Houston. Just last month, along with Tim Tebow, Chip and Joanna paid off the mortgage of a family in need who appeared on their show Fixer Upper, reported People.

So, yeah, I'd say donating their used — albeit incredibly high end — bassinet to an expecting mother is just the kind of thing that Chip and Joanna would do.

Editor's Note: This article has been updated to include a photo and comment from Kelly Claggett.