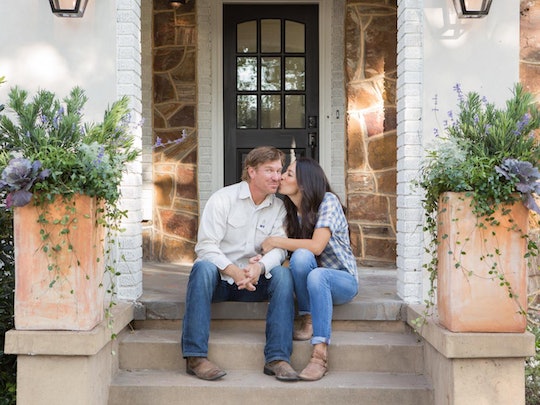 Until a few months ago, the married stars of HGTV's popular home renovation show Fixer Upper were beloved by a fan base, but one group in particular has grown wary of the couple. Here's everything you need to know about Chip and Joanna Gaines' LGBTQ controversy. Since 2013, Fixer Upper has followed the Gaines as they help couples select and renovate dilapidated houses into dream homes in the Waco, Texas, area. Chip is a contractor, and Joanna is an interior designer. Joanna's spinoff, Behind the Design, is scheduled to premiere in 2018, according to USA Today.

It was no secret that the Gaines are Evangelical Christians (they've even gotten shout-outs from Billy Graham's organization) but it didn't factor into their show prominently. But last November, BuzzFeed's Kate Aurthur revealed that the megachurch the Gaines attend, Antioch Community Church, espouses anti-LGBTQ views, and mused, "are the Gaineses against same-sex marriage? And would they ever feature a same-sex couple on the show, as have HGTV's House Hunters and Property Brothers?" HGTV responded to BuzzFeed: "We don’t discriminate against members of the LGBT community in any of our shows. HGTV is proud to have a crystal clear, consistent record of including people from all walks of life in its series." The Gaineses declined to comment. The Gaineses didn't respond to Romper's request for comment.

BuzzFeed came under attack following the article, which some called a "bizarre" or a "hit piece." Others accused the outlet of trying to "destroy" the couple. In black and white on Antioch's website, marriage is defined as "the uniting of one man and one woman," in which a wife must "submit herself graciously" to her husband. And during a 2015 sermon, Antioch's pastor Jimmy Seibert, a "dear friend" of the couple, called same-sex marriage a "clear biblical admonition," insisted that "homosexuality is a sin" caused primarily by abuse, and preached the myth of conversion, a dangerous and psychologically harmful practice.

LGBTQ and Evangelical fans alike waited about a month for a response from the couple. The statement they did release didn't condemn Seibert. Chip published a post on Joanna's blog on Jan. 2 writing that he and Joanna "care about you for the simple fact that you are a person, our neighbor on planet earth. It’s not about what color your skin is, how much money you have in the bank, your political affiliation, sexual orientation, gender, nationality or faith."

But some anti-LGBTQ people — Seibert included — reframe bigotry as "caring" about LGBTQ people; they're only calling them sinners and rejecting their right to marry because they care about their souls. In his post, Chip called for people to "lovingly disagree" with one another: "If your position only extends love to the people who agree with you, we want to respectfully challenge that position." It's hard to tell if he's calling for Evangelicals to love LGBTQ people who disagree that they're sinners who could choose to be straight if they wanted, or if he wants LGBTQ people to tolerate intolerance and keep on watching his show. The show is currently filming its fifth (no doubt successful) season.