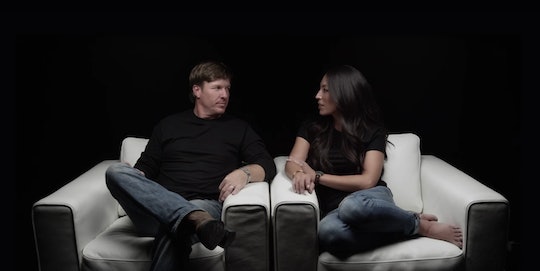 Don't Freak Out, But Chip & Joanna Gaines Might Have A New Show

Shiplap diehards everywhere were heartbroken when HGTV's golden couple announced they were leaving their show after a mere five seasons. But now, it seems that all might not be lost. Yeah, that's right. Chip and Joanna Gaines might have a new show sooner rather than later, although it might not be what fans expect. Back in September, the couple announced that season 5 of their hit show, Fixer Upper, would be their last. Per the announcement on their website, the Gaines decided that they "need to catch our breath for a moment."

And while they told fans that taking a break was their way working on themselves, this latest news may just call that into question. "Our plan is to take this time to shore up and strengthen the spots that are weak," they wrote back in September, "rest the places that are tired and give lots of love and attention to both our family and our businesses." However, now, a source close to HGTV's parent company, Scripps Networks, has told Vanity Fair that " the two had been clashing with HGTV before they chose to end their series," and are now pitching a new show to other networks, although certain contract details could prevent them from doing another home improvement show. Romper has reached out to representatives for Chip and Joanna and is awaiting a response.

Reportedly, the couple had been wanting to feature more of their Magnolia brand products on air but wasn't permitted to do so. According to the source, "This isn’t how business is done with Scripps. You have to come to some arrangement if you want to show your products on your HGTV show." So now, it seems as though Chip and Joanna are considering taking their talents to another network, and maybe one where they can show off more of their brand.

"Who knows what the future holds, but we’re excited for whatever is around the bend and in the meantime, we will definitely be staying in touch," the couple wrote back in September. Perhaps they knew that this wouldn't be the end of their time on television, but didn't want to get any of their fans' hopes up. Whatever the case, the anonymous source seems pretty confident that something is coming from the charming couple soon.

However, the source also noted that, due to the couple's contract with the Scripps Network, it was unlikely that they would be pitching another home improvement show since their contract (which is still in place) likely had a stipulation prohibiting them from doing a home improvement show with another network. "They’ve got to be pitching something in another format—maybe a talk show or something like that," the source told Vanity Fair.

Really, though, it's doubtful that fans really care what the Gaines' rumored new show will be, as the couple is so widely popular. In fact, as Vanity Fair reported, the news that Chip and Joanna might be looking to work with another network could actually harm a deal in the making for the Scripps Network. According to the publication, "Discovery Communications "is due to complete its acquisition of Scripps in early 2018, in a cash-and-stock deal worth $14.6 billion." So, while most fans of shiplap and witty back and forth are probably pleased with this news, not everyone is. Nor has it even been confirmed.

Chip and Jo’s decision to leave Fixer Upper is truly just based on their wanting to catch their breath for a minute—to rest, refresh, and spend even more time with their family and growing businesses. It is not based on anything related to Discovery-Scripps, or anything else that has been falsely reported.

So, until this news is confirmed, perhaps fans shouldn't get too excited about the possibility of seeing Chip and Joanna back on their screens sometime soon. But, of course, a girl can dream, right?