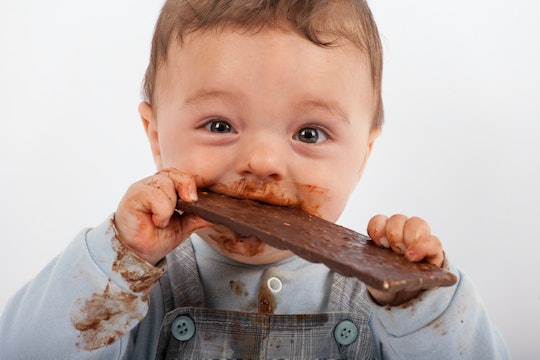 Chocolate Could Be Wiped Out In Less Than 50 Years, According To Terrifying New Study

Experts warn that global warming is affecting the growth of cocoa beans, which means that my worst dream could very soon be realized: We're in the midst of a chocolate crisis, people, because chocolate could soon be extinct, Express reported. Like, in 32 years. Yup, in 32 years, there may not be any chocolate left on the planet. Let that sink in...

Cacao trees sprout cocoa beans and can only grow in a rainforest within a narrow strip of land, according to Business Insider. Said land must be at least 20 degrees north and south of the equator. The National Oceanic and Atmospheric Administration (NOAA) explains that cacao plants need very specific conditions including fairly uniform temperatures, high humidity, abundant rain, nitrogen-rich soil, and protection from the wind.

But rising global temperatures are making it evermore difficult to grow the trees, according to Express. The moisture-sucking heat is putting them under so much threat, experts believe that the plant will soon be impossible to grow. Côte d’Ivoire and Ghana, where more than 50 percent of the world's cocoa is produced, are both slated to face a 3.8-degree Fahrenheit increase in temperatures and drier conditions by 2050, Forbes reported. This means that farmers will have to move their cacao trees over 1,000 feet up into mountainous terrain, which is largely preserved for wildlife, according to the National Oceanic and Atmospheric Administration. Competition for land will be stiff.

Stiff but crucial — you know, to keep giving farmers the work and to keep placating many of us chocolate consumers. According to Express, the average westerner eats 286 bars of chocolate every single year; the demand for chocolate actually outstrips supply, so Africa has had to recently up its intake to better align with the demand in Europe and North America.

In order to keep up with current demands from the Western world alone, farmers would need to plant 10 cacao trees, Express reported, and that's going to be unsustainable, especially as Africa and Asia's demand for chocolate increases. After all, dark chocolate is actually a nutritious source of antioxidants that can improve blood flow, lower blood pressure, protect against cardiovascular disease, keep your skin safer from the sun, and improve brain function, according to Healthline. (Even if that's not why most of us indulge...)

Demand aside, cacao plants seem to be victims of fungal disease, according to Forbes, and climate change may be contributing to the spreading of these diseases. According to a 2010 Scientific American article, "Death and Chocolate: Disease Threatens to Devastate Global Cocoa Supply," the spread of witch’s broom, frosty pod, and other fungal diseases had wiped out cacao trees in Central America, their original natural habitat. Now, scientists worry that climate change could spread these fungal diseases around the world where cocoa beans are produced today, Forbes reported.

If and when these fungal diseases do spread, most farmers won't be able to protect their trees. The majority of cocoa is produced by farmers who are unable to afford fertilizers and insecticides, Doug Hawkins told Express. Hawkins represents Hardman Agribusiness, a capital markets firm focused on the agricultural business sector.

"More than 90 percent of the global cocoa crop is produced by smallholders on subsistence farms with unimproved planting material," Hawkins told Express, noting that we could be looking at a chocolate deficit of 100,000 tons a year in the next few years.

So now what? Well, Mars, Inc., a company that makes chocolate and is best known for Snickers, has pledged to reduce its carbon emissions as part of its "Sustainability in a Generation" program. That's all well and good. But, moreover, it's teaming up with The University of California, Berkeley's Jennifer Doudna and her team to develop stronger cacao plants, Forbes reported. Doudna is one of the inventors of CRISPR (Clustered Regularly Interspaced Short Palindromic Repeats) techniques, which allow scientists to make "tiny, precise tweaks to DNA that were never possible before," according to Business Insider. This means that Doudna's team could potentially genetically modify cacao plants that would resist fungal diseases and that would be able to survive in a broader set of conditions.