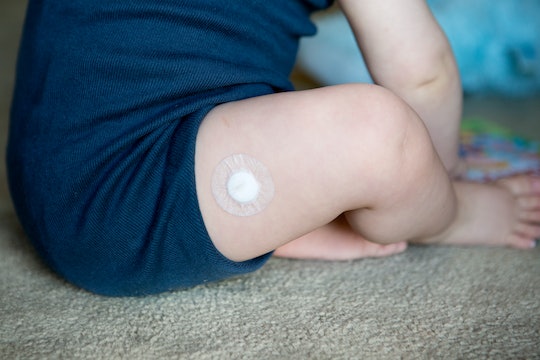 Choosing To Vaccinate My Kids Wasn't Easy, But This Is Why I Did It

When it comes to vaccinations, there seems to be two black and white camps set up: educated parents who care about their children who get their kids vaccinated or else, and educated parents who eschew vaccinations because they’re totally unnatural and they have formaldehyde, and germs are good, thank you very much. In real life, though, it’s not as cut and dry as parents who vaccinate versus parents who don’t. There are more than enough adults with kids who look at vaccinations like I do: mothers and fathers who genuinely recognize the very real risks of vaccinating, and of not vaccinating. The truth is, for many parents, there aren’t any real answers, but there’s plenty of real speculation. Yes, vaccinations save lives, but they also have side effects and risks, just like any other pharmaceutical agent. Then again, walking out of my front door has a risk — everything carries some kind of risk.

Reactions and possible side-effects to vaccines are real, and the scariest part is that often times parents have no way of knowing what’s happening until it’s happening. (It's a risk even adults take.) And sometimes, knowingly injecting something into a perfectly healthy baby just in case they might be exposed to some disease that may or may not kill them later is a hard trade-off to make, even for the most educated among us. All it takes is a simple look at the insert of any vaccine to be completely and totally horrified by some of the side effects lists. The common chicken pox vaccine, for instance, lists the potential for heart failure. Heart failure, O RLY?

There’s also the vaccine adverse event reporting system to consider. On one hand, the fact that such a reporting system exists is reassuring in that it encourages adults with kids to report any side effects, even if they aren’t necessarily proven to be linked to the vaccine, but on the other hand, the guidelines on what can and can’t be reported are pretty damn strict. To be candid, it makes me wonder just how many side effects go unreported or ignored simply because they don’t show any true links or proof.

Taking all of this into consideration, I still choose to get my children vaccinated because I believe vaccines do good; I still get them vaccinated because I don’t have much reason not to; I still get my kids vaccinated because, for us, it’s the right thing to do. And even though I still choose to get my children vaccinated, it scares the hell out of me. Each and every shot my kids have ever gotten has been preceded by hand-wringing, research, sleepless nights, and “should we really do this?” conversations with my husband, followed by sheer and total panic the moment that needle hits their chubby thighs.

As a nurse, I’m well acquainted with the medical-professional vaccine culture. Even when I’d give vaccinations to complete strangers, I’d still worry. I’d give a vaccination for sexually-transmitted disease to babies less than 24 hours old, and wonder: How does that even become necessary, let alone safe?

Although the CDC urges parents to get vulnerable babies immunized as early as possible, babies immune systems are different than adults, and their risk of exposure to many of the diseases they’re immunized against isn’t always as threatening as we may think. Immunizations are tied to well-child visits simply because that’s the most effective way to ensure that a majority of our nation’s infants get vaccinated, according to author Jennifer Margulis. The American Academy of Pediatrics knows parents and caregivers are less likely to schedule second, third, and even fourth appointments for vaccinations, and they’re already competing against parents who opt to skip vaccinations when their children are sick.

So when I’m sitting in the doctor’s office when my baby is days old, two weeks old, a month old, two months old, four months old, six months old, and a 1 year old, I can’t help but feel like part of the herd, like I’m following the crowd without any real thought. As a parent, I know how hard it can be to have an open and honest discussion with my children’s pediatricians about the safety of vaccinations. As a parent, I worry about being labeled and judged. As a nurse, I know that doctors often label and judge.

When I butted heads with my children’s pediatrician, a doctor I’ve also worked with, it disappointed and frustrated me. Despite whatever medical advice parents subscribe to, it’s still our right to question the safety of everything put into our kids' bodies. It’s not bad, nor is it silly or annoying, to simply take a minute to pause and ask, “Does my kid need this vaccine?” and get an honest answer from a doctor or other medical care professional before moving forward.

When my first daughter was 6 months old, she came down with the swine flu. It was very severe and for days, I cried while she ran dangerously high fevers and couldn’t even find the strength to nurse. She was too young to receive a vaccination against the flu, and I’m not even sure they did vaccinations against that strain at that time, but the sight of her, listless and limp, terrified me to my core. I vowed I would never, ever skip vaccinations for my children if something so easy could prevent so much misery.

But as the years rolled by, I started to question if I was being duped, too. I wondered if vaccinations could actually harm my kids’ immune systems in ways that we hadn’t really considered before, or whether vaccines are even effective because babies’ immune systems are still immature and developing even after they leave the womb.

Armed with that knowledge, I did my own “experiment” at home. I decided that we’d all skip out on the annual flu vaccine and just see what happened. The 2014 flu vaccine wasn’t completely effective, so there’s a chance it may not have even helped my family had they gotten it, but I kid you not when I say last flu season was the absolute worst I’ve ever experienced. My four kids were sick non-stop, and all at different times. When one would feel better, another would begin to feel worse. I spent a month in a never-ending cycle of sick children, trapped inside my house. I didn’t even remember the last time we’d seen the light of day or taken in the fresh air. My experiment was by no means scientific, but it taught me a valuable lesson: vaccines may not be all-natural, but neither is watching your kids suffer.

At the end of the day, it’s just common sense to know that exposing your body to disease means exposing your body to the risks associated with it. And every time I panic when the needle approaches my baby’s skin, I remind myself that we’ve been through this before, and we came out on the other side. Then again, it still won’t stop me from worrying about the next shot.

Oh, now that I think about it, flu season is totally upon us, isn’t it?