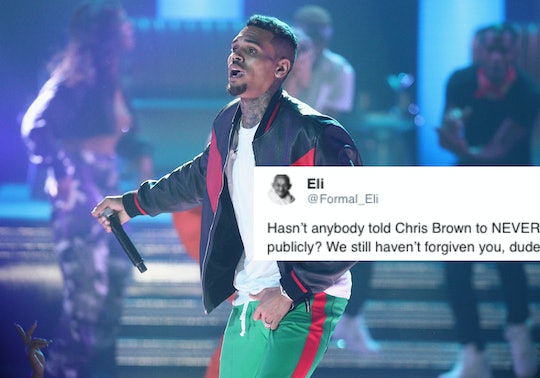 Rihanna's 30th birthday, which fell on Tuesday Feb. 20, was full of well-wishes, but one comment in particular stood out. When her ex-boyfriend, Chris Brown, wished Rihanna a happy birthday on Instagram, most fans were absolutely not having it. Though some loyal to Brown defended him and praised the post, many found the gesture inappropriate considering the dark nature of Brown and Rihanna's past relationship.

Brown posted what seems to be a childhood photo of Rihanna, though his only caption was an entirely capitalized happy birthday message. It isn't the first time he has publicly reached out to Rihanna in the last few months, either; when she posted photos from the 2017 Crop Over festival in Barbados in August, Brown commented with an emoji of a pair of eyes looking interestedly to the side. He also tweeted that he wanted to go on tour with Rihanna, Beyoncé, and Bruno Mars. That drew criticism as well according to CNN, with one Twitter user, @astrog1rll, announcing, "Chris Brown needs to leave Rihanna alone FOREVER."

That wasn't the only comment. Much like the birthday shout-out, Brown showing any public attention to Rihanna wasn't something that sat well with fans of the pop star. Rihanna herself hasn't commented on any of it, at least not yet. But fans have been making their feelings about the situation known.

The comments section of Brown's Instagram post ranged from confusion to heart-eyed emojis to outright disgust, with more than one user reiterating that Brown should stay away from Rihanna. In 2009, Brown plead guilty to one count of assault with the intent of doing great bodily injury after a pre-Grammys party where they allegedly began to argue about a text message from a woman Brown had been previously involved with and lied about. In an interview with 20/20 shortly after, Rihanna told Diane Sawyer that Brown punched her and bit her numerous times. "All I kept thinking was, 'When is it going to stop?'" she said.

Brown's career hasn't suffered in the interim as he continued to win Grammys and put out albums, but his subsequent relationships have had their share of issues as well. In June 2017, E! News reported that his ex Karrueche Tran was granted a permanent restraining order for five years against Brown after allegations that he physically abused her, harassed her, and threatened to kill her.

In 2015, Rihanna spoke to Vanity Fair about her complicated and conflicting emotions in the wake of the abuse, as well as what motivated her to get back together with Brown briefly before walking away for good. Ultimately, she said, "I don't hate him. I will care about him until the day I die. We're not friends, but it's not like we're enemies. We don't have much of a relationship now."

Fans didn't just express themselves on Brown's Instagram page; they also took to Twitter to share their opinions. Many felt that Brown simply needed to stay away from Rihanna and stop contacting her, while others criticized those who continued to defend Brown. The reactions were definitely mixed, landing on extreme ends of the spectrum: some thought Brown deserved to be forgiven, while others were utterly horrified by that idea.

Mark me down as horrified. Breaking the cycle of abuse is immensely difficult to do, and public reminders seem like they would be especially painful. No one except Rihanna can speak to her feelings about receiving a birthday message from Brown, but since he posted it on social media, people are going to have opinions about it. And it seems like the prevailing opinion is that Brown would have been better off not posting anything at all.