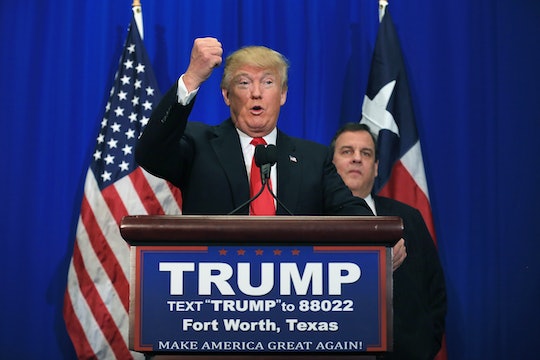 On Super Tuesday, Donald Trump seemed to be unstoppable. After amassing a grand total of five states, the billionaire mogul decided to take to the stage in Palm Beach, Florida to declare himself the victor the evening. Of course, no one was paying attention to the front-runner, because Chris Christie, who introduced Trump, looked positively terrified to be there — and it was tragically hilarious.

The fact that Christie was even present at the event was surprising in and of itself, leading many to question whether the New Jersey governor was being tapped for a potential vice presidential bid, or whether he was being held against his will. (Neither of which would have been surprising.)

"Donald Trump is the clear winner on Super Tuesday," Christie recited stiffly earlier in the evening, just prior to Trump's self-congratulatory speech. "Tonight is the beginning of Donald Trump bringing the Republican Party together." Naturally, no one believed a word Christie was saying because, instead of looking equally smug and victorious (like his prospective running mate), Christie looked more like a deer frozen in the headlights, still seemingly confused as to how the both of them had reached that particular political juncture.

Salon's Scott Eric Kaufman hysterically dubbed Christie a "human sad-trombone" in a column on Tuesday night, jokingly referring to his introduction as one of the lowest-energy victory speeches of the 2016 election. "[Christie] delivered the most unenthusiastic introduction to something labeled a 'victory' in the recorded history of contests that could end in either 'victory' or 'defeat,'" Kaufman joked.

By the time Trump had taken to the stage to wave his arms, widen his eyes dramatically, and yell at reporters (or, as some call it, "speak") it was already all over. Not a single viewer at home was listening to the GOP front-runner — they were too busy trying to decipher whether Christie was sending an SOS by blinking.

Perhaps Christie was just trying to get an in on the VP nomination by buttering-up to Trump. Considering that he handed the billionaire a coveted endorsement last week (suffering through a slew of embarrassing retractions from newspapers that had previously donated their support to the New Jersey governor in the process), it certainly wouldn't be surprising.

That didn't make the moment any less uncomfortable. "Chris Christie just gave what looked like a coerced confession," joked Rep. Justin Amash (R-Michigan), in a tweet that probably wasn't too far off the mark, adding later, "It's staged to look like a hostage situation."

Chris Christie may have already dropped out of the GOP race, but you can't deny that he knows how to steal the show. Even if he doesn't mean to.