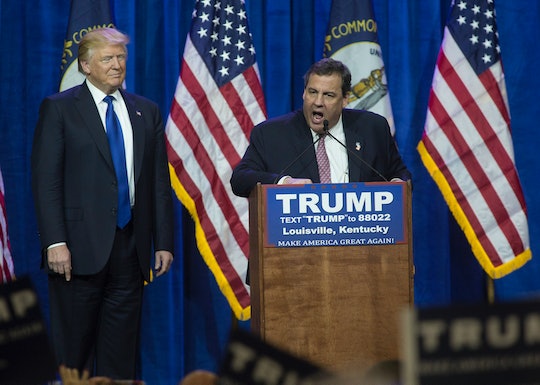 Chris Christie Super Tuesday Face Memes & Jokes, Because We All Noticed How Terrified He Looked

If there's anything more bizarre than imagining Donald Trump actually winning the GOP presidential nomination, it's New Jersey Gov. Chris Christie's face behind Donald Trump on Super Tuesday. Christie — who recently made many a headline for endorsing Trump after dropping out of the race himself — introduced the candidate following Trump's many Super Tuesday wins, and expressed confidence in him. Not to mention confidence in Trump's "movement," as Christie called it. Not that he seemed altogether happy about that movement.

In fact, after watching Trump take the podium to celebrate his Super Tuesday wins, Christie seemed altogether deflated, looking quite different from his typical lively demeanor. Standing behind the candidate, Christie seemed troubled — and why wouldn't he be, considering he not only has newspapers asking him to resign following his endorsement, but he's also supporting Donald Freaking Trump. He of Celebrity Apprentice and gold-plated everything.

Well, as folks like Eli Manning have learned, the Internet is all too eager to make a field day out of famous people's questionable expressions. And the Internet most definitely noticed Christie uncomfortably lurking in the background of Super Tuesday.

Just see a few of the memes and jokes that made their way on the Web during Trump's press conference.

If nothing else, it seems the Internet does agree:

Or did we all lose?