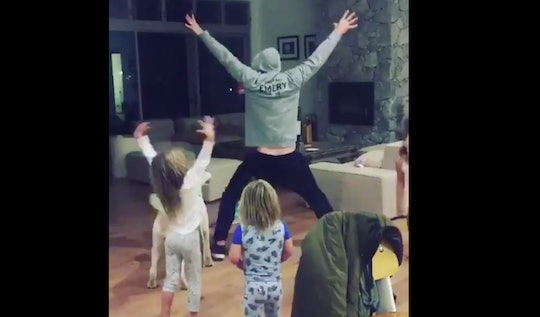 Parents know that sometimes, the most memorable moments are the least flattering... but that doesn't mean you won't record them for your family videos, or Twitter, for that matter. Newly minted super dad Chris Hemsworth lip syncing "Wrecking Ball" with his kids in the living room will leave you slain not only with how funny it is, but how much Hemsworth has reached epic levels of #dadgoals.

Hemsworth took to his Twitter account to share the perfect family clip, in which he and kids India Rose, 6, and twins Trista and Sasha, 4, all thrashed around while lip syncing to his soon-to-be sister-in-law Miley Cyrus' hit "Wrecking Ball." (To be honest, who hasn't?) People reported that he and his pajama-clad kids seemed to be having such a good time that the clip even ended with their family dog barking at Chris, seemingly concerned that something was wrong.

"What started as a ground breaking music video ended in a savage attack by a cowardly K9. Never work with Kids or Animals," Hemsworth joked on Twitter, where he shared the video. Miley Cyrus also shared it on her own feed, captioning it simply and succinctly with a series of red heart emojis.

But fans already knew that Hemsworth was an amazing dad to his brood of three, whom he shares with his actor, producer, and model wife, Elsa Pataky. In an interview with Australia's Daily Life, he said that thanks to his kids, he finally "knows what love is." (Cue the uncontrollable crying emoji.) However, that doesn't mean life is always easy. "Each time you add one, it feels like three more,” he said.

In the same interview, he also opened up about other things he's learned as a dad, and what it takes to raise what he calls "non-stop, active kids." He continued: "The biggest thing I’ve learned by having kids is that now I know what love is. I know what frustration is. I know the full gamut of emotions, good and bad. I feel I had just scratched the surface prior."

However, he also claimed that living in Australia made it a lot easier to raise a family. "We have a very normal existence," he said. "Here, if someone recognizes you, it doesn’t tend to be as big a deal." Hemsworth continued:

People are like, ‘Oh yeah, cool,’ then onward with the day. If you are living in Hollywood, people have traveled from around the world to see people in the entertainment business and they’ve got the cameras ready and a bigger deal is made of it. Here, we have a very normal existence, people are very respectful, and that was why we chose to come here.

Hemsworth and Pataky aren't against sharing some of their family's sweetest moments with the world – for which fans are undoubtedly grateful. The couple has also shared other instances of their fantastic parenting, such as when Hemsworth baked his daughter India a dinosaur cake, did yoga on the beach with them, and even took them to work.

"I think it makes you less selfish, because it's no longer about you," Hemsworth told E! about what being a father had taught him:

It's nice to not spend all your time thinking about your own problems and garbage up there and I just have so much fun doing it. And now I'm a bit more choosy, I think, with when I work and how I work because it better be worthwhile to take me away from them.

Hemsworth may play a super hero on the big screen, but it's beyond clear that he's a super dad IRL, and a serious inspiration to parents everywhere.