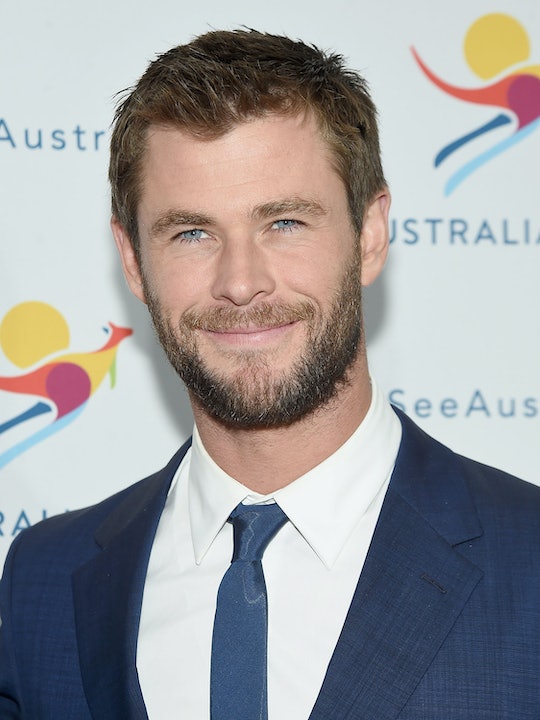 Chris Hemsworth's Daughter Asked Him For A Certain Body Part, & His Response Was Amazing

On Monday, Australian actor and superhero of my heart Chris Hemsworth appeared on The Ellen Show to promote his latest movie, The Huntsman: Winter's War, coming to theaters this Friday. But the best moment to come out of the interview was that Chris Hemsworth's daughter apparently wants a penis — I know, try not to choke on your coffee like I did this morning when I read that. Here's a little context for the 32-year-old movie star's unusual anecdote. Host Ellen DeGeneres asked Hemsworth about his three children: his 4-year-old daughter India and 2-year-old twin boys Sasha and Tristan. Hemsworth told DeGeneres, "My daughter's kind of envious of my boys at the moment."

When asked to explain, the hilarious story unfolded that his daughter India wanted "one of those things" her brothers and dad have, or, as she put it: "You know, the things in between their legs that you have." Cue laughter from the audience as Hemsworth recounted his semi-panicked processing of what his daughter just said to him. Taking the mature approach, he offered that girls have breasts — to which his daughter immediately cut him off and shouted, "I don't want breasts!" Checking one more time, Hemsworth confirms: "...A penis?" and his daughter pleads, in the way only a 4-year-old can: "I really want a penis!"

How do you even begin to tackle such a seriously awkward demand from your young child with a straight face? Amazingly, Hemsworth handled the whole thing like a boss, telling his daughter "You can be whatever you wanna be." That was apparently the best answer he could have given, as his daughter replied with a simple, "Thanks dad!" and ran off to the playground. Hemsworth and DeGeneres joked that if his daughter really wanted one, she could just grow one with a pill in the future.

The whole anecdote illustrated not only the beautifully adorable naïvete of childhood, but Hemsworth's ability to roll with his daughter's request in a wonderfully positive and affirming way: No changing the subject, no shaming around the human body, no anger at her asking such a question. Of course, his daughter might not be so thrilled when she Googles herself when she's a teenager and sees his interview on The Ellen Show — but she can be proud of the fact that her dad gave her as awesome an answer as he did. Watch the whole hysterical exchange below, starting at the one-minute mark:

One the one hand, they've got a great family story to share for years to come. And on the other hand, Hemsworth showed parents everywhere how even a silly moment like this can still be a powerful, teachable moment for children. He also made me swoon even more for him, because seriously — best dad moment ever.