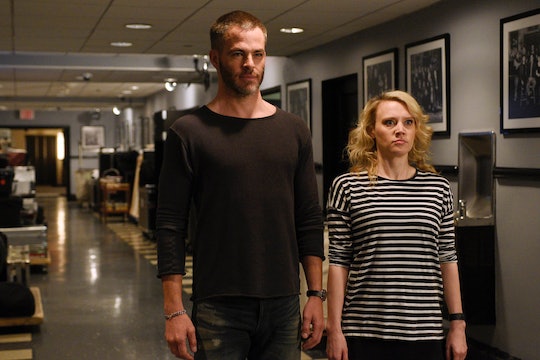 It's very likely that there were a lot of viewers wondering who was hosting Saturday Night Live this week. And they would be totally validated. Luckily, everyone's FOMO was addressed right away. Chris Pine's Saturday Night Live opening monologue song openly addressed the problem that there are way too many famous actors named Chris in Hollywood. How can anyone keep up?

In case you're "just that old" or don't read entertainment news on the daily, Chris Pine is Captain Kirk in the most recent Star Trek iterations and will be starring in the upcoming Wonder Woman movie. He was also in Into The Woods. But if you're not completely sure who he is, it's not your fault. You're not alone. Pine knows you may not know which Chris he is, which is why he sang an entire song about getting him mixed up with all of the other popular guys in Hollywood that look a lot like him who are also named "Chris."

He's not Chris Evans, Pratt, or Hemsworth. He's a very specific Chris. The one from Into The Woods. Captain Kirk. The opening SNL song was a nice way to prep viewers into not thinking too much about why Chris Pine was hosting. Did Emma Stone/Watson/Roberts have to do this? Just asking.

Pine didn't stop singing at the opening monologue, either. For two sketches afterwards, he showed off his vocal chops. He even joined in on a very, very '90s sketch singing some R. Kelly to beat out Brandy and Monica's "The Boy Is Mine." Not an easy thing to do.

If viewers didn't already love Pine, they'll now forever know him as the guy who did three musical sketches in a row that time he hosted Saturday Night Live. Which is not a bad reputation to have at all. For a Chris.

Pine was ready to get down and dirty though this weekend. He told Entertainment Weekly, “I’m super out of breath because they just made me dance here at the actual stage of Saturday Night Live," while adding, "I couldn’t be more excited." Pine also noted that the writer's strike that would have threatened to shut down the whole show didn't happen this week (thanks to some good negotiating). Pine said earlier this week, "The writers strike didn’t happen, so we’re going full steam ahead.”

Sure, all fans knew that Pine captivated audiences in Into the Woods. But his Saturday Night Live hosting gig showed that he was all for putting his musical skills to work for any occasion. Just don't get him twisted with all of the other Chris' in Hollywood.