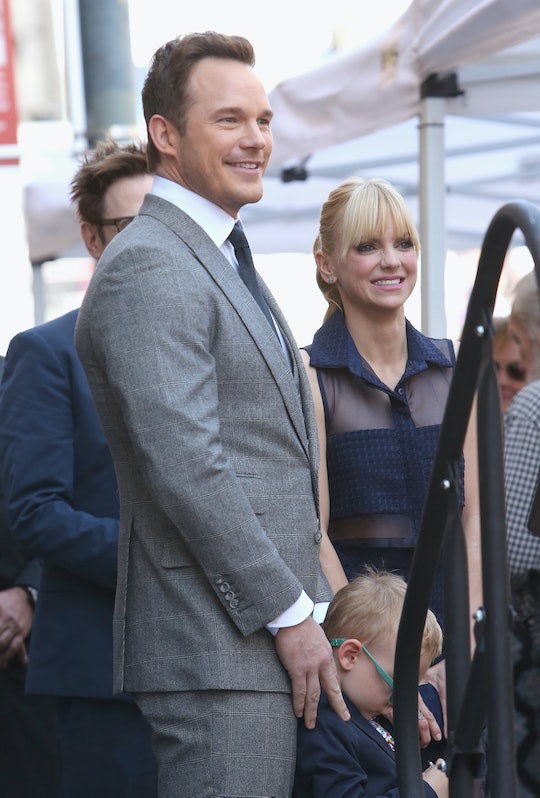 Things can get ugly after a divorce. Just ask Angelina and Brad, or Tom and Katie, Johnny and Amber, or any number of celeb couples who have called it quits in the public eye. But there are a few that manage to remain friends despite the many odds stacked against them. The best example of such post-divorce comradery might be Anna Faris and Chris Pratt. After eight years of marriage, Pratt and Faris announced their split nearly two years ago. Since then, the two have been spotted happily attending their son's sporting events, double dating with their new significant others, and more. How can this be? Well, it's because Chris Pratt and Anna Faris are post-divorce relationship goals.

When the two announced their separation, back in August 2017, they posted a joint statement on social media, according to CNN. There was no back and forth, no he-said, she-said, just an amicable announcement that showed respect and love. And, that's been the foundation of their separated lives ever since.

In fact, when Pratt announced his engagement to Katherine Schwarzenegger late Sunday night, it was his ex-wife, Faris, who was one of the first to congratulate him and his future wife, according to People.

In the engagement announcement, Pratt wrote: "Sweet Katherine, so happy you said yes! I’m thrilled to be marrying you. Proud to live boldly in faith with you. Here we go! 💍🙏♥️"

Not long after, Faris replied: "I'm so happy for you both!! Congratulations!"

Pratt was first linked to Schwarzenegger as early as June of last year, when they were spotted on a picnic together, according to Entertainment Tonight. Although they didn't make it Instagram official until December when Pratt posted an ode to his new girl, according to Cosmopolitan.

But, Pratt isn't the only one who has moved on since the 2017 split. Faris also has a new beau, as she's been dating cinematographer Michael Barrett since November 2017, according to Us Weekly.

Through all of this, Faris has always resolved to keep things positive, according to People.

"We’ll always have each other and be incredible friends. There is still so much laughter in our lives together, and he is so proud of me, still," Faris said. "We watched each other grow, and he still cracks me up all the time. And I think I crack him up — unless he’s a really good actor and great at faking laughter."

Friends, adore, and laughter aren't usually words that former Hollywood couples — or any normal couples, for that matter — use to describe their post-divorce relationships. But leave it to Faris and Pratt to keep it cool and set the bar for future exes to build a friendship while moving on.

They might be divorced, but they remain united for their son, Faris said in an interview with Women's Health.

"What Chris and I try to do is to communicate openly," Faris said. "We reiterate that there aren't rules to this. We have a lot of love and friendship, and our big goal is to protect Jack."

The outlook is good for both Pratt and Faris in their own personal lives. And now that Pratt announced his engagement, will Farris follow suit with wedding bells of her own? Only time will tell. But it's a safe bet, that no matter what happens, the two will continue to remain friends and co-parent in a way that is definitely envy-worthy.