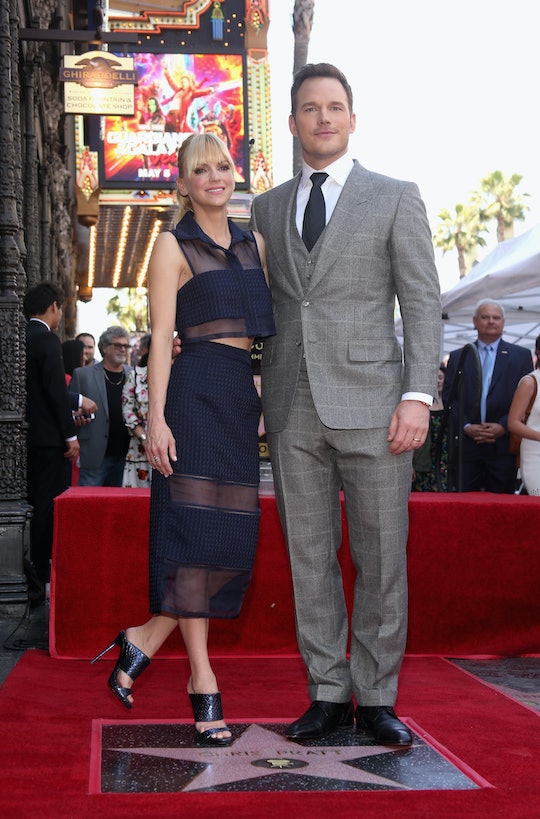 One-time relationship goals super-couple Anna Faris and Chris Pratt may have swiftly broken the entire internet's heart when they announced their split in 2017, but as parents to their 6-year-old son, Jack, it's also clear they have one incredibly important reason to maintain their bond no matter what. And according to TMZ, they're taking that *very* seriously: court documents obtained by the site show Chris Pratt and Anna Faris' divorce agreement says they'll be required to live near each other until their son has finished the 6th grade. While sharing a neighborhood with your ex may not exactly be everyone's idea of a good time, it shows that they're both on board to put Jack's needs first.

TMZ reported Wednesday that the Hollywood couple had finalized the terms of their divorce in court, and that, as part of the agreement, they've decided to remain living within five miles of each other until Jack has completed middle school. That puts them, at most, a short drive away from one another for the next five years or so, and it's a pretty smart way of upping their chances of maintaining their coparenting over the years. Living that close, after all, means they'll still both be able to stay equally involved in Jack's life — it won't be particularly hard for either of them to handle school pickup, or to make it to his soccer games, for example — and it will be that much easier for Jack to spend time with both his parents without too much disruption to his daily life.

Given that both Faris and Pratt are celebrities likely helps their arrangement though, of course, since they probably won't have to worry about being able to afford separate homes in the same area they were living in while married, but the travel requirements of their jobs also might make things trickier. In an effort to address that though, Faris and Pratt also made sure to include other stipulations into their agreement, like the fact that they are actually required to give the other 30 days notice if they want to travel out of the country with Jack, according to TMZ.

For now, at least, it seems that the legal requirements on their custody arrangement may just be a formality: though both Pratt and Faris have since moved on to new relationships, they were recently spotted taking Jack trick-or-treating as a group on Halloween, according to Us Weekly — and all four adults even got dressed up. In other words, the former spouses definitely seem to be making a point to maintain their friendship for Jack's sake, even if it means making a point to welcome their new partners into the fold.

Of course, even under the best of circumstances, coparenting after divorce still isn't exactly easy, and in an interview with Entertainment Weekly in April, Pratt admitted that "divorce sucks," even if they were doing a pretty good job at "still being kind to one another." But in an interview with Marie Claire a month later, Faris sounded pretty optimistic about the state of their post-split relationship. When asked about Pratt's take on their divorce, she said, "I feel it's more dramatic than it is. Chris and I have a great friendship and Jack is so happy and so loved."

Even amid the ups and downs of calling it quits after eight years of marriage (especially when the public spent much of that time holding their relationship on a pedestal), it sounds like Pratt and Faris are really doing their best to keep things honest, open, and as friendly and low-key as possible. And although that's not always possible for all couples after a relationship breakdown, their continued respect for one another is definitely going to benefit their son as he grows — especially since he can now count on having both his parents involved and nearby.