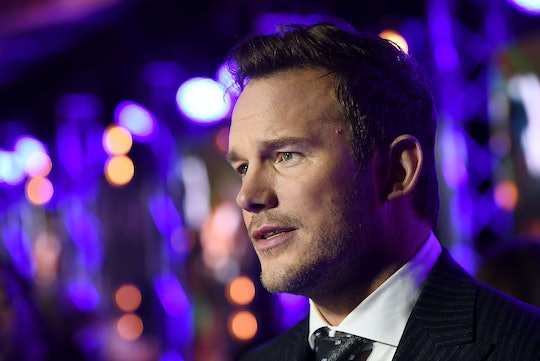 There are a lot of things to love about Chris Pratt. He's talented and hilarious; he completely adores his wife, Anna Faris, and their adorable son, Jack; despite his fame, he mostly just seems to be a down-to-earth, normal guy, who's ended up in the public spotlight in a major way. But Pratt has also definitely had his fair share of blunders. He's no stranger to making comments he's later regretted. Most recently, the star came under fire for an insensitive joke about subtitles he made on Instagram, and in a follow-up post, Chris Pratt used sign language to apologize. Even though he explained that he hadn't at all intended to be offensive, his apology was an important example of the consequences of ableist language.

According to People, the Guardians of the Galaxy Vol. 2 star recently shared a since-deleted video to Instagram in which Pratt joked about people preferring to rely on subtitles than actually hearing the audio. He later explained that he was trying to ensure people actually engaged with the video instead of just scrolling past it after reading the words — videos on Instagram are automatically muted unless users specifically choose to click on them and turn on the sound. But as a number of commenters noted, expecting people to not "just read the subtitles" ignores the fact that, for millions of Americans with hearing impairments, subtitles are invaluable.

In a follow-up post on Thursday, Pratt posted another video, this time one in which the star could be seen using sign language to send a message to his followers. In the lengthy caption accompanying the post, Pratt seemed very intent on trying to rectify his mistake. He wrote,

Instagram does this thing where it mutes all the videos it shows and forces you to turn on the volume in order to hear them. (maybe because most people are watching those videos at work when they should be working and don't want to get caught. I know that's when I do it.) So when I made a video recently with subtitles, and requested that people turn up the volume and not just 'read the subtitles' it was so people wouldn't scroll past the video on mute, thus watching and digesting the information in the video.

HOWEVER, I realize now doing so was incredibly insensitive to the many folks out there who depend on subtitles. More than 38 million Americans live with some sort of hearing disability. So I want to apologize.

He went on to explain "the last thing in the world [he] would want to do is offend ... anybody who suffers from hearing loss or any other disability," and vowed to "try to be a little less ignorant about it" in the future. He also made a point to emphasize that, while it might seem like the apology was just a PR move meant to ensure he remained likeable, he really did regret his joke, and was sincere about making it right. Pratt wrote,

Now... I know some of you are going to say, 'Hey! Chris only apologized because his publicist made him!' Well. That is not the case. As always I control my social media. Nobody else. And I am doing this because I'm actually really sorry.

Apologies are powerful. I don't dole them out Willy-Nilly. This is one of those moments where I screwed up and here's me begging your pardon. I hope you accept my apology.

Pratt also recognized that, more than just making an amends, he could also use the opportunity to discuss the need for closed captioning on Instagram to highlight the fact that not everyone can just turn up the volume if they want to watch a clip. Adding the hashtag, #CCinstanow to his message, Pratt wrote that his own mistake led him to look into the matter a little bit more, and that he realized that the social media platform didn't seem to have a way to automatically add subtitles to videos. And given the fact that that one small change could make a huge difference to many people, he called on Instagram to make a change:

And on that note. Why doesn't Instagram have some kind of technology to automatically add subtitles to its videos? Or at least the option. I did a little exploring and it seems lacking in that area. Shouldn't there be an option for closed captioning or something?

I've made them lord knows how much money with my videos and pictures. Essentially sharing myself for free. I know they profit. So... GET ON IT INSTAGRAM!!! Put closed captioning on your app. #CCinstaNow

Pratt's apology was an important one, not just because it was a way to make up for the fact that his comment was hurtful to many people, but because it also provided a way to raise some awareness about the kind of ableist thinking that discriminates against people with disabilities. It might not seem like a big deal to someone without a hearing impairment that Instagram videos don't automatically come with closed captioning, but when you actually consider how many people rely on assistive technology to help them in their day-to-day lives, it's incredibly privileged to be able to think that it shouldn't be a priority, or that we shouldn't all try to be more aware of the comments we make or the language that we use, and the implications they carry for others.

In situations like these, there seems to inevitably be plenty of people who want to argue that an apology like Pratt's is yet another example of out-of-control political correctness, or that it's proof that people have become "too sensitive" and far too easily offended. But what that viewpoint ignores is that the reason people are offended is because, for far too long, the needs of people with disabilities have just been almost entirely ignored.

The fact is, Pratt's apology isn't about political correctness or bowing to the internet morality police, it's about recognizing the little ways that discriminatory thinking can enter our lives in seemingly innocent ways. And most importantly, it's about showing that, once you've realized that it's happened, you've got to take a step back and fix your mistake.