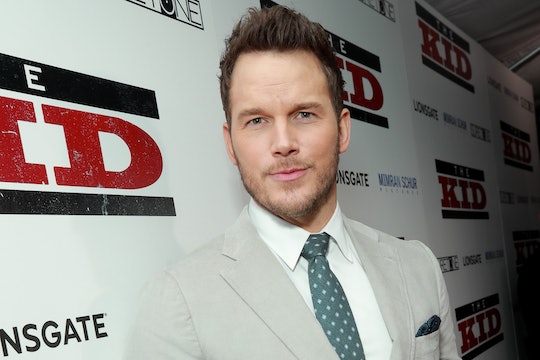 If you're a celebrity news junkie like me, then you've probably seen Chris Pratt's name in headlines a lot lately. From his recent marriage to Katherine Schwarzenegger, to his new wife's touching Instagram tribute on Father's Day, to his upcoming movie projects, it seems that things are only getting better for this talented actor. But you know what they say about love and marriage, and all that. Who knows — perhaps another baby carriage won't be too far away? And in case you weren't already aware, Chris Pratt's quotes about being a father shows he takes the job seriously.

In case you need a refresher, the Guardians of the Galaxy star shares a son, Jack, 6, with his ex-wife Anna Faris. It has become crystal clear through the years that although Pratt has an amazing sense of humor — he doesn't mess around when it comes to parenting. Actually, Jack is all the way at the top of his priority list. (As he should be.) "I’ve done all kinds of cool things as an actor — I’ve jumped out of helicopters and done some daring stunts and played baseball in a professional stadium," he told Variety in 2014. "But none of it means anything compared to being somebody’s daddy." Awwww!

In 2014, Pratt opened up with Redbook magazine about what it was like when Jack was born nine weeks premature. "The baby was so beautiful to us, and I look back at the photos of him and it must have been jarring for other people to come in and see him, but to us he was so beautiful and perfect," he told the publication. "We were scared for a long time." Pratt continued:

He is such a fighter, he's amazing. He's so open and there's no fear in him no matter what. He is so charming that my plan is to just let him take care of us as soon as he's old enough.

During an appearance on The Ellen Show in 2015, Pratt told host Ellen DeGeneres how it can be difficult to discipline his toddler — only because he's so frustrating polite. "From what I understand, most of the terrible two stuff comes from a kid or toddler’s inability to express what they want," Pratt told DeGeneres, according to Today. "He’s so vocal, it’s not that hard for him. It's super frustrating because you're like, 'Alright, now. Jack, I think it's time for bed,' and he'll say, 'Hmm, I thought about it and no thanks, Dad, not right now.' And I’m like, 'He’s so polite! What am I supposed to do?'

LOL. I can confidently say I've never had this particular issue with a toddler.

In that same interview, Pratt also shared an anecdote about preparing Jack for the hustle and bustle of holiday season gatherings. And it says a lot about him as a parent.

I was sitting down and I said, 'You know, Jack, there's a lot of people here and it's very loud and people are going to be having a lot of fun and there might even be some tension,' and he just said, 'It's family.' I almost started crying.

Even after his divorce with Anna Faris and recent marriage to Katherine Schwarzenegger, Pratt and Faris remain dedicated to co-parenting Jack amicably. “Divorce sucks,” he told Entertainment Weekly in April 2018. “But at the end of the day, we’ve got a great kid who’s got two parents who love him very much. And we’re finding a way to navigate this while still remaining friends and still being kind to one another.”

When it comes down to it, Chris Pratt seem like a pretty awesome dad. His thoughtfulness and dedication when it comes to co-parenting Jack is admirable. And I no doubt that if he and Schwarzenegger eventually do have children together, he will make them his top priorities as well.