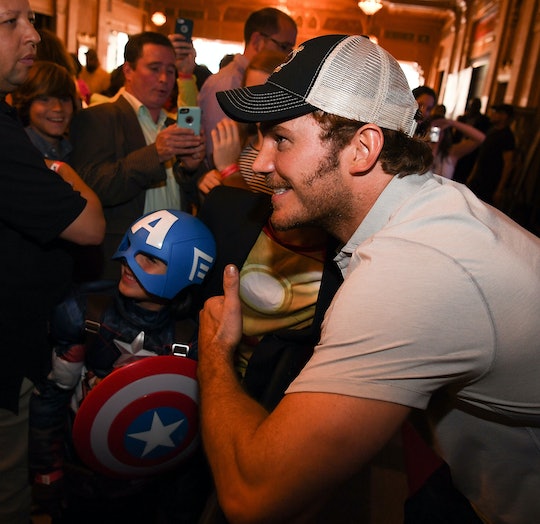 Chris Pratt might be the cutest Hollywood dad to ever grace social media. Seriously, he and (equally adorable) wife Anna Faris routinely take to Twitter and Instagram to post “felfies” — as in “family selfies” — with their little boy, Jack. And the couple has been incredibly honest about their attempts to a laid-back approach to parenting, even with the paparazzi watching. And the couple’s fun —and funny — outlook seems to be rubbing off on the 3-year-old, according to Pratt. Chris Pratt's quotes about parenting little Jack are pretty sweet, and a reminder of why he’s definitely high on the list of lovable dads.

The star of Jurassic World and Guardians of the Galaxy has already given people plenty of reasons to swoon over him as a dad. Marie Claire reported that, in a recent episode of her podcast, Anna Faris Is Unqualified, the actress shared an incredible story about Pratt’s emotional reaction to his son’s birth and the unforgettable moment that the actor became a dad:

He's holding my hand and he's just sobbing. I was so scared he would be turned off by the whole thing, that he'll never be attracted to me again. But I don't know, that was amazing, seeing his face.

Too cute for words. And then, there’s the sweet story that Pratt told The Ellen Show host Ellen DeGeneres about the remarkable little boy that Jack is growing into — and how tough it can be to discipline a toddler when they make their demands in such a polite way:

From what I understand, most of the terrible two stuff comes from a kid or toddler’s inability to express what they want. [...] He’s so vocal, it’s not that hard for him. It's super frustrating because you're like, 'Alright, now. Jack, I think it's time for bed,' and he'll say, 'Hm, I thought about it and no thanks, Dad, not right now.' And I’m like, 'He’s so polite! What am I supposed to do?'

Yeah, that’s exactly how they get you, Pratt. Stay strong.

But later in the interview, Pratt had something else to say about young Jack that is perhaps the actor’s biggest statement about parenting. In the clip, which has since been posted to YouTube, Pratt told DeGeneres a story about preparing the then-2-year-old for the chaos of the holiday season:

I was sitting down and I said, 'You know, Jack, there's a lot of people here and it's very loud and people are going to be having a lot of fun and there might even be some tension,' and he just said, 'It's family.' I almost started crying.

Such an incredibly grown-up insight from such a little guy — and it’s even more telling that Pratt was able to take in the moment and see it as both a teaching and learning moment for both of them.

That might be the best message that Pratt and Faris share with fans in every one of their family photos. Pratt and Faris seem to be saying that parenting is all about being present, finding the humor, and trying — trying — to keep it all in perspective. And, given how happy and bright little Jack appears, it looks like the couple is doing a fantastic job.