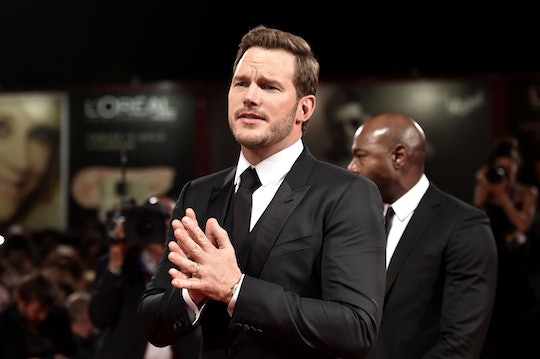 As it turns out, not everyone is perfect. Even Chris Pratt. Yes, even everyone's favorite goofy guy-next-door turned A-list movie star has room to improve. On Thursday, Pratt was called out for cultural appropriation after using the term "spirit animal" on Twitter, and Pratt responded by asking if the person who called him out was joking. But using the term "spirit animal" has actually been identified as cultural appropriation, according to BuzzFeed. Pratt's representatives did not respond to Romper's request for comment.

Native Americans have called non-Native's use of the term culturally appropriative in the past. In 2015, Kerry Washington tweeted about the Steve Jobs movie and actress Kate Winslet's graceful performance, according to Refinery29. She said, "Kate Winslet is my spirit animal," to which one Twitter user replied, "Please don't use the term 'spirit animal' like that. Disrespectful to indigenous beliefs and communities." Washington later tweeted an apology and thanks to the Twitter community for educating her.

So when compared to Washington's classy, open-minded response, it seems like Pratt could've done a little better than ask the Twitter user if she was serious. Whether Pratt agrees with the user or her definition of cultural appropriation aside, the right thing to do would be to just listen to the people speaking up about the issue. He could have used it as an opportunity to learn about some of the concerns of his fellow Americans.

For her part, Laura Zats, the user who called out Pratt was polite about trying to educate him. She even provided him with an alternative to use instead of "spirit animal."

Zats makes a good point, too. Even if you don't agree that it's offensive or appropriative, using a different word like "patronus" is just as easy, and has the added perk of not offending anyone.

But really, there's no reason to not accept that "spirit animal" used by non-Natives can be offensive. The term did originate in Native American spirituality, according to Megan Garber of the Atlantic. Garber writes:

In that tradition, though there are variations across tribes and cultures, the spirit animal—otherwise known as a "totem animal"—generally takes the form of a single animal with which a person or a clan shares a certain set of characteristics, and therefore a kinship. The animal acts as a guide and protector for humans. In death, the humans' spirits are absorbed into the animal. The Internet ... has taken that metaphysical tradition and turned it into LOLs.

Garber argues that our modern culture in America has, essentially, taken a deeply meaningful aspect of an older culture, trivialized it, and turned it into cute photo captions and tweets. It also doesn't help that many of the other aspects of said older culture are disappearing, too, thanks to the larger erasure of Native experiences in today's America.

Some groups have acted on these facts. In 2014, the student government at the University of Montana passed a resolution that banned the question "What is your spirit animal?" at meetings after protests from a Native American group, according to the Montana Kaimin.

So, the issue of the term being culturally appropriative isn't really new; Native people have been saying it for a while. But maybe it's time we all — including you, Chris Pratt — take a listen and follow suit behind Kerry Washington and the University of Montana.