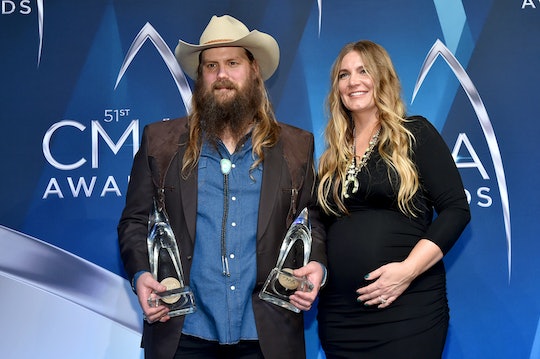 Husband and wife musicians Chris Stapleton and Morgane Stapleton made headlines earlier this year when they expanded their family of four with twin boys. And now, seven months later, they're in the news again for an equally exciting reason. Chris Stapleton just announced that Morgane is pregnant again — which will round the Stapleton brood out to a whopping seven members.

Chris Stapleton revealed the news in his concert Friday night at Madison Square Garden in New York City. “Some of you may know that we have four children. And we just had twins, about seven months ago,” Chris told the crowd, as The Blast reported. "Now there’s four for us, but we’re gonna make it five!” he added in a sing-song voice, to which the audience burst out into screams and applause. The Blast also shared a video of the moment, which Morgane was on stage for. She looked over at her husband with a smile.

Most pregnant moms wait to announce a pregnancy until they are out of their first trimester, which is about three months after becoming pregnant. A major reason for that is because about 80 percent of miscarriages happen in the first trimester, according to Healthline. So if Morgane and Chris followed the tradition, it would mean she became pregnant around early August, which was barely four months after she gave birth to her twins back in April.

It's pretty uncommon for women to get pregnant just a few months after giving birth. The American College of Obstetricians and Gynecologists (ACOG) advises women to "avoid interpregnancy intervals shorter than 6 months and should be counseled about the risks and benefits of repeat pregnancy sooner than 18 months," based on the findings of a 2006 meta-analysis published in JAMA. That said, there is a chance that Morgane is only a few weeks pregnant, and that she did wait the recommended six months to get pregnant after giving birth to the twins.

The Stapletons have not yet shared information regarding Morgane's due date, so it's unclear how long she waited to get pregnant again. But I have no doubt that Morgane, a woman who has been through three pregnancies, is working closely with her doctor to make sure she and her baby are healthy.

Chris and Morgane welcomed their twins in April — and just like the pregnancy news this weekend, the twins' birth was announced in a very public venue. During the Academy of Country Music Awards this past April, Chris won Album of the Year for "From A Room: Volume 1." He was noticeably absent from the April 15 awards show (which just so happened to be on his birthday), so when host Reba McEntire accepted the trophy on his behalf, she told the audience why he wasn't there, according to Access Hollywood. "Those little rascals came a little bit early," she told the audience during the awards show. "Hot off the press. Twin boys!"

Morgane confirmed the happy news in an Instagram post a few days later, along with a photo of her baby boys. "Thank you for all the love! We’re so grateful to finally be home with our sweet family," she captioned the black-and-white shot. "At more than a month early, we had a week long stay in the nicu & the incredible people there kept our boys healthy & happy. Words cannot express our gratitude for you all & what you did for our family."

Going from four little rascals to five can't be that much of an adjustment, right? Good luck, Chris and Morgane!