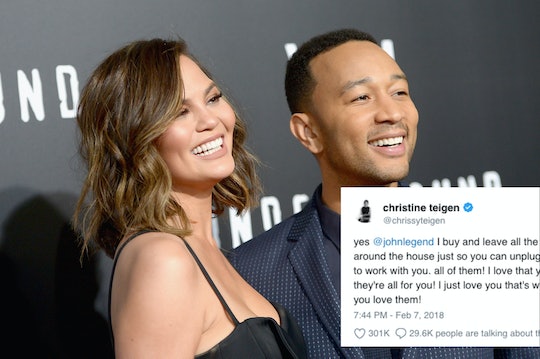 The most romantic holiday of the year is right around the corner, and it probably feels like perfect, happy couples are everywhere. But love isn’t all hearts and candy, as anyone who’s been with their soulmate for longer than a few minutes will admit. There’s a dark underside to love, you guys. It’s entirely possible to love someone with all your heart and still threaten to crush them if they keep stealing all the covers at night, or leave the ice cream on the counter again, or even (and I’m just spitballing here) if they leave their wet towels on the bed just one more stinking time. Yes, even the most adorable, made-for-each-other couples can push each other’s buttons. Celebrity couple Chrissy Teigen and John Legend can probably relate, as she ranted online recently about what’s probably the most relatable couple-problem ever. Chrissy Teigen called out John Legend on Twitter for doing something that any loving twosome will recognize: he swiped her phone charger.

And Teigen, who is expecting her second child, went online to let him know that she was over it.

“Yes @johnlegend I buy and leave all the phone chargers all around the house just so you can unplug them all and take them to work with you,” she tweeted.

“All of them! I love that you love chargers! They're all for you! I just love you that's why I buy them. Because you love them!”

I don’t know anyone who shares space with another person (either romantically, as roommates, or just because a bestie sometimes forgets they don’t actually live with you) who can’t relate to this. My husband and I share finances, life goals, and children. But at this very moment, as I’m typing this story, my phone is charging on the cord that I keep hidden from him in my office. We have phone cords in our bedroom, the kitchen, and the cars but we can never seem to find a cord in our house. So, I have one tucked away in my desk. My husband doesn’t know about this cord, you guys. And if you value my sanity — and my battery life — you’ll help me keep it a secret, OK?

Plenty of Teigen’s Twitter followers shared their own stories of what it’s like to love someone with a talent for making household items disappear. One woman asked, “Who knew so many men loved chargers this way?” She added, “Nothing makes my day like frantically looking for a charger when I’m on 2%. And he has them all. Every single one for one phone.”

Another follower offered an example from his life (with someone who clearly is just trying to start a fight):

Also when they unplug your phone to charge theirs, and don’t even plug yours back in when they’re done because they’re sociopaths.

Who knew there were so many monsters in the world? Anyway, back to the Legends.

Teigen, whose talent for clapbacks and extreme pettiness on social media is unparalleled, later posted a photo of a unicorn-shaped charger complete with bubblegum pink hair and a rainbow-hued horn. “I’m buying this,” she tweeted, then dared her husband, “Take this one u thief.”

(By the way, yes the unicorn charger Teigen tweeted about really is for sale online at Wattzup or on Amazon. Cute, right?)

So far Legend hasn’t responded on Twitter to the charges against him. (See what I did there?) One can only hope, though, that when he got home from work he made amends for his hoarding ways by bringing Teigen a new charger that he’d promise not to touch — and handing over a bag of her favorite snacks.