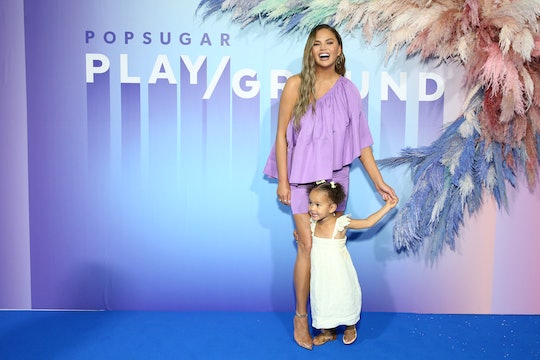 By now, people are well aware that Chrissy Teigen and John Legend's two children — 3-year-old daughter, Luna, and 1-year-old son, Miles, are too adorable. In spite of their cuteness, the little ones don't get along all of the time. So, people will love that Chrissy Teigen captured a "rare moment" between Luna and Miles that is so adorable it will make your heart melt.

If Luna and Miles do fight a lot, Teigen's social media accounts don't really show this. Sure, siblings fight a lot. But Teigen's kids are angels, right? Not all of the time. On Friday afternoon, Teigen took to Instagram to share the most precious photo of her two kids. In the photo, Luna can be seen with her arms wrapped around Miles' neck in a loving embrace. Miles, who is wearing his older sister's shoes, seems pretty pleased to be so close to his sister. It's such a tender and sweet moment captured on camera and you can tell this is one of those photos that she will treasure forever. "Luna put her shoes on him," she wrote in the caption of the photo.

But, it turns out out that this sweet moment isn't quite common for the siblings. "P.S. this is an extremely rare moment don't get too used to it," Teigen added.

Teigen's followers are embracing this rare moment of sibling love — although some experienced parents can recognize that Luna might have some ulterior motives by putting her brother in a head lock.

"When it looks like a hug, but it's really a chokehold (I have a three and one year old, too!)," one commenter acknowledged.

People are used to seeing Luna and Miles get along. Teigen has posted videos of them sharing toys, sharing meals, and vacationing together. But, Teigen told PopSugar in June that she doesn't post everything her kids do to social media for reasons that they'll appreciate when they're older. "I see a lot of people posting their kids' tantrums and having super meltdowns," she said. "I don't post that stuff because that, to me, is like — I wouldn't want someone to do that. You try to protect them, of course, but for the most part, aside from the kids, there is no limit." This means that Teigen's followers will likely never see them not getting along. But it's not like that is a bad thing — her kids really are so adorable, and if she only wants to show her followers their cuter moments, she should. Her followers definitely aren't complaining.

Although things may look perfect in front of the camera, things aren't always perfect behind the camera. Teigen's newest Instagram post proves that.

More Like This
Meghan Markle Wore Lilibet On Her Chest As She Fed Chickens At Their California Home
Mariah Carey Says She Has Never Called Herself The “Queen Of Christmas”
Jodie Turner-Smith Opens Up About Being Secretly Married & Pregnant
Elon Musk Shares New Photos Of Son, X, With His Own Twitter Badge