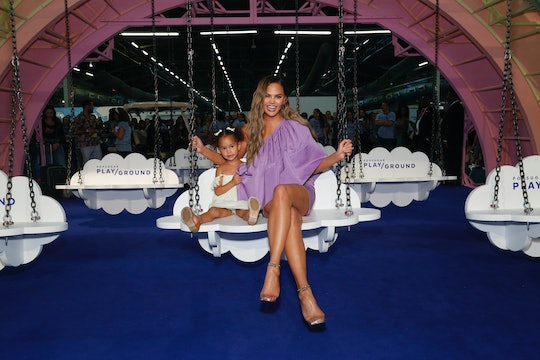 Oh My Goodness, This Video Of 3-Year-Old Luna Talking About A "Cute Boy" Is TOO Much

Chrissy Teigen's 3-year-old daughter, Luna, is growing up so fast. The little girl just started her second year of pre-school earlier this week, and seems to be making friends very quickly. People are loving Chrissy Teigen documenting Luna talking about her first crush, because it is the sweetest thing ever and definitely something that Teigen will want to share with Luna's future partner one day.

On Thursday, Teigen took to Instagram to share the sweetest video of her conversation with Luna. In the video, Luna sits on the couch wearing an Anna from Frozen dress talking to her mom about what she likes in her crush in a super conversational tone. "He always listens to my feelings," Luna said in the video. "He always shares."

But Teigen really wants to know more about Luna's crush, so she has a few more questions for her. "Is he cute?" she asked Luna. "Yeah," Luna replied. "He has really long hair...it's brown." It sounds like Luna has a boyfriend on her hands — except the little girl is adamant that they are just friends for now. "He's my cute cute boy friend," she said in the video.Although the two are not dating, Luna will go over his house "only if he invites me."

Sounds like Teigen might have her hands full. "Oh mannnnnn what the?!?!," she wrote in the caption of the post. "You're three!!!" Luna has 15 more years to go until she is out of the house. It's best that Teigen gets prepared for this sooner rather than later.

As expected, Teigen's friends and followers are living for this video.

"Does he have an older brother in his 30's who also listens and likes to share?!," one commenter wrote.

But most people are praising Luna's friend (who is not her boyfriend) for being so attentive to her needs.

"That's all a girl could ever want!," one commenter wrote.

"Only three but knows how to find a quality man!," another commenter hilariously added.

"I've been married for 30 years and I'm still trying to get him to listen to my needs...#relationshipgoals," one commenter perfectly stated.

These commenters have a point — she should be applauded for making friends so quickly. Luna started her second year of pre-school just three days before the video was taken, according to People. Needless to say, she must be pretty popular already.

This isn't the first time that Luna has caught the attention of the boys in her class. Just last year, on the first day of her first year of pre-school, Luna pushed a boy, according to Cosmopolitan. And in true Teigen fashion, she caught Luna admitting to it on camera. Luckily, things seem to be on the upswing this year and Luna seems to be making more friends than enemies, which Teigen is probably relieved to hear.

Although some parents might warn against their 3-year-old daughters falling too quickly for boys at school, Teigen thoroughly seems to be enjoying this moment. "Thinking about when she gets married and I put this in the beginning of the video compilation oh my godddddd," she wrote in the comments of the video.

If Luna is already falling this hard for boys on the first week of her second year of pre-school, then imagine how she'll be by the end of the school year.